The IFS has rebuked the Conservative's marriage tax break. Research shows that it is "unlikely to lead to significant improvements in young children’s outcomes". 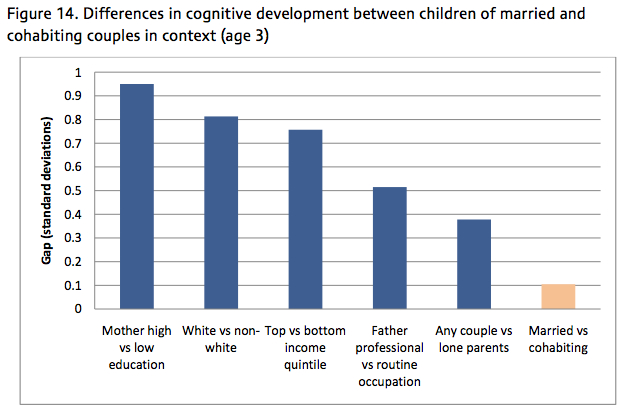 In a stinging rebuke to the Conservative party’s plans to provide a £550 million marriage tax break, the Institute for Fiscal Studies has published research showing that “encouraging parents to marry [is] unlikely to lead to significant improvements in young children’s outcomes”.

Data produced by the IFS shows that there has been a large increase in the number of children born outside marriage since the 1970s including a doubling in the number cohabitants, jointly registered at the same address, who have children. As the chart below shows, the outcome gaps in cognitive development between children born to married and cohabiting parents are relatively small compared with the outcome gaps associated with a range of other factors.

In the Centre for Social Justice’s recent ‘Green paper on the family’, Iain Duncan Smith wrote:

“You cannot mend Britain’s broken society unless you support and value the institution which is at the heart of a stable society.”

“The Conservative Party has announced its decision to “recognise marriage” in the tax system through a partially transferable personal allowance, which will benefit married couples where one pays tax at the basic-rate, and the other is not a tax-payer. Our work shows that, even if more couples did decide to get married in response to the small monetary incentive, such a policy would have a limited effect on young children’s development …

“Previous studies have documented that children born to married couples have better developmental outcomes than children born to cohabiting couples. However, few have tried to address comprehensively whether this difference is attributable to the legal form of the relationship – in other words, whether marriage itself improves children’s development – or whether other factors, such as underlying differences in married and cohabiting parents, also play a role.”

The finding is consistent with a recent paper by Ruth Lister and Fran Bennett for Renewal, ‘The new ‘champion of progressive ideals? Cameron’s Conservative party: poverty, family policy and welfare reform’. Lister and Bennett concluded:

“As a number of commentators have pointed out, it is not possible to conclude from the statistics that marriage itself causes the positive outcomes associated with it and that therefore the stability of a society is a function of the support given to the institution of marriage. In particular, social scientists suggest that the stability associated with marriage can be attributed to the kind of people who choose to get married or to cohabit and to the values that they hold.”

This weekend, Left Foot Forward covered a new campaign, “Don’t judge my family“. Signatories have agreed to donate to charity the £3 per week tax break if the Conservative’s came to power – a total of £45,150 so far.