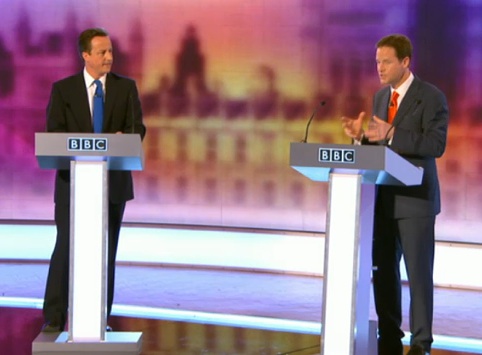 Immigration proved to be an emotive issue in last night’s leaders’ debate, with David Cameron and Nick Clegg clashing on immigration caps (Conservative policy) and amnesties (Liberal Democrat policy). I wrote here yesterday about the Liberal Democrats’ immigration policies, so today it seems appropriate to analyse the Conservatives’ policy of capping immigration.

Mr Clegg was keen to emphasise last night that a cap on immigration wouldn’t deliver what the Conservatives are promising – because it could only apply to migrants from outside the EU. He got his stats wrong, but the point stands. In fact, a cap could have a limited impact even on migration from outside the EU. A recent ippr report examined the numbers in some detail.

Instigating these policies would be challenging, and a cap at this level would still be very difficult to achieve if improvements in the economy lead to increases in work-related migration to pre-recession levels.

A cap of 40,000 could only be met with drastic changes to policy. Given that EU migration is outside the control of government, and asylum/refugee migration is governed by international conventions, very significant reductions in migration to the UK for work and study, and restrictions on family formation/reunion, would be required.

A cap of 40,000 looks impossible to achieve from the UK’s current position without threatening both economic performance and the rights of British nationals and settled migrants to be with their families. The Conservatives’ immigration cap policy is pretty meaningless until they set out the level at which the cap would be set, and caps set at the kind of levels which they are implicitly promising would be impossible to deliver without causing the UK significant economic harm.

13 Responses to “Cam’s immigration cap: do the numbers stack up?”