When you go to the loo today, spare a thought for the millions of people having to take a pee or deal with a period round the back of a hut - in full view. 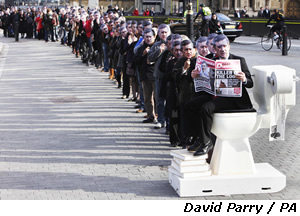 Our guest writer is Kate Norgrove, head of campaigns at WaterAid

When you go to the loo today, spare a thought for the millions of people having to take a pee or deal with a period round the back of a hut in full view of the neighbours.

Last week, UNICEF and the World Health Organisation (WHO) gave us what finally looked like a good news story, releasing a report showing that we are on track to meet the Millennium Development Goal (MDG) on water:

“Goal 7, target 10 of the Millennium Development Goals aims at halving by 2015 the proportion of people without sustainable access to safe drinking water and basic sanitation.”

Things are not all that rosy though. We are still way off meeting the water goal in Africa, and progress on the sanitation MDG target is dire with projections showing that in Africa it will not be met for another 200 years. This puts sanitation up there with maternal mortality as the second most off-track MDG on the African continent.

The economic case for sanitation is sound. The WHO estimates that for every dollar invested in sanitation, nine dollars is returned to the economy. Arguably it was building the London sewer system after the great stink of 1858 that allowed our economy to grow. Why, then, do we hardly ever hear about it? There seems to be no political currency in championing toilets. Sanitation is literally a dirty issue.

It is a mixed picture when it comes to the UK government and the way it deals with the dirt. At the end of April, championed and pushed on by the Department for International Development (DFID), the first annual high level meeting on sanitation and water will be held in order to try and reverse the political and financial neglect of the sector.

Unbelievably this is the first time finance and water ministers will have got together with donors to try and work a way through this crisis. Campaigners are for agreement at this meeting to create a global partnership, similar to Education for All, to accelerate progress on sanitation – a Global Framework for Action imaginatively called ‘Sanitation and Water for All”.

Yet just as one team at DFID and a few individuals in government deserve congratulations for pushing this historic agreement, the rest of DFID seems to be forgetting it at best, ignoring it at worst. A meeting last week assessing progress on the MDGs at DFID focused on the most off-track MDGs, and yet sanitation and water were barely mentioned. Aid to water and sanitation has grown in recent years but is set to flat-line after 2011 as the overall aid budget increases, unless new commitments are made.

The Tories picked up on this in their green paper, saying “basic but vital areas – like sanitation and water – are permanently neglected”, and quoting DFID admitting it has “dropped the ball on sanitation”.

The 10-year review of the MDGs is coming up this September. Here’s hoping whoever is in government by then talks acts more and talks less than in recent years.

5 Responses to “Millions still living without drinking water and sanitation”