Tax dodger Lord Ashcroft donated £4.7m - 78% of money spent by the Tories in key marginals, much higher than the 2% figure they've been spinning. 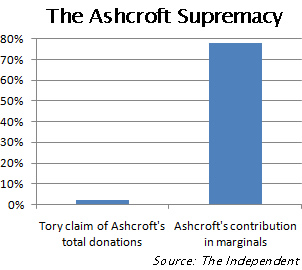 Our guest writer is Dan McCurry

Private polling by the Conservatives shows that their lead in the polls, which has been slipping nationally in recent months, is holding up well in key marginal seats, due to their massive financial resources, as compared to the Labour party’s active volunteers.

If they have such massive funds that they can buy the outcome of democracy, then what declarations of interests are contained on their campaign material? Do these employees tell the voters they are paid when they canvass?

Their marginal seat campaign is masterminded by the UK-tax-avoiding billionaire Lord Ashcroft. Of the £6m that the Tories have poured into these 117 key marginals, Ashcroft’s contribution to Tory coffers has totaled a massive £4.7m – 78%, 39 times higher than the mere “2%” figure the Tories claim he has donated.

Yet, not only does this foreign-based billionaire avoid UK tax, but he has avoided scrutiny which affects the legality of the donations as well as his right to bear his treasured title and to vote in the upper chamber, following the undertakings attached to the award of his peerage – to make the UK his permanent home for tax purposes by the end of 2000.

What declaration of interests are displayed on their paid-for campaigning in these marginal constituencies?

Do they declare that the posters, phone-calls, canvassing and leaflets are funded by a foreign-based billionaire with a ten year history of avoiding transparency? If not, then why not?

If not, then are they arguing that he is a rogue deputy-chair, while the integrity of the party as a whole is not in question? If so, then they should demonstrate their transparency with declarations of interest in all paid-for campaigning.

If they are unwilling to do this, then perhaps we should conclude that they are still just the same old Tories?

• Channel Four News has more on the use of the Ashcroft cash in key marginals, and Political Scrapbook reports on Michael Gove’s description of Ashcroft as a “comedian” who puts the Tories’ “entire strategy at risk”.

23 Responses to “Questions mount for Tories over The Aschcroft Supremacy”