George Osborne's plans to block the National Insurance rise have been ridiculed by Labour. But the Tories have a £3bn black hole in their own tax rising plans. 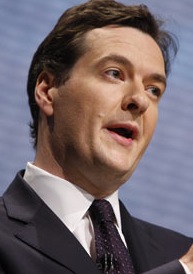 George Osborne’s plans to block the Government’s National Insurance rise “by cutting waste” have been ridiculed by Labour using David Cameron’s own words. But the Tories’ plans reveal a £3 billion black hole in their own tax rising plans.

Labour has attacked George Osborne’s announcement this morning by highlighting David Cameron’s own words at a speech in Birmingham in May 2008 where the Tory leader said:

“At the last election, we produced something called the James Review. A long list of all the government functions, quangos and bureaucrats a Conservative government would cut …

“And the James Report was a serious and impressive piece of work. But was the overall approach credible? I’m not so sure. To make a long list of efficiency savings in advance of an election; to add them up to produce a great big total; to turn that total into debt reduction, spending increases elsewhere and a tax cut…?

“People didn’t believe it, for the very good reason that controlling public spending is not about a one-off efficiency drive, it’s about a whole new culture of government. There is a simple fact which political historians amongst you will know very well. The government ‘efficiency drive’ is one of the oldest tricks in the book. The trouble is, it’s nearly always just that – a trick.”

But analysis by Left Foot Forward shows that the Tories’ own deficit reduction plan now faces a £3 billion blackhole in their tax rise plans. Ken Clarke has said that the Conservative party want to achieve the EU target of reducing the “Treaty Deficit” to 3 per cent by 2014-15 with one-fifth of the consolidation coming through tax rises. As we showed last week, this equates to £16 billion of tax rises by 2013-14. The Government meanwhile has a slower deficit reduction plan with a larger chunk – £19 billion – made up of tax rises.

If the Tories are to scrap £6 billion of Labour’s planned tax rises and still meet their stated objectives, it leaves a £3 billion gap in their tax raising plans. To retain any credibility, the Conservatives will have to set out how they will plug this £3 billion black hole. Will it mean a rise in VAT?

• an additional rate of income tax of 50 per cent for incomes over £150,000 and the restriction of the personal allowance for those with incomes of over £100,000, from April 2010;
• the restriction of pensions tax relief for those with gross of incomes of £130,000 and over, from April 2011;
• a one percentage point increase in the employee, employer and self-employed rates of National Insurance Contributions (NICs) from April 2011; and
• a one penny per litre above inflation increase in fuel duty and real terms increases to alcohol and tobacco duties, due to be delivered in each year to 2014-15.

Both Next Left, Labour List, and Liberal Democrat Voice reckon that Osborne’s announcement is a strategic error by the Tory shadow chancellor while Hopi Sen ridicules the move. Meanwhile, the mainstream media have looked at the analysis from the Institute for Fiscal Studies: “surprise in figures” says The Times; puts “recovery at risk” according to the Guardian. The IFS conclude:

“Reducing the deficit more quickly than the Government plans to will therefore require even greater cuts to public services spending, or to greater reliance on welfare cuts or tax increases that might be as economically costly as the NI increases they are seeking to mitigate.”