A poll has found that more Tory voters believe Cameron should allow a referendum on voting reform than hold up the Bill in the Lords, by 45%:32%. 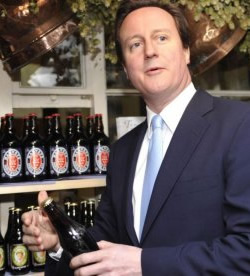 Following the shrinking of his poll lead to just two points yesterday, David Cameron has come under further poll pressure – this time from Conservative voters. A YouGov/Vote For A Change survey has found that more Tory voters believe Cameron should allow a referendum on voting reform than hold up the Bill in the Lords, by 45:32.

The survey also revealed only 16 per cent of the public as a whole thought Cameron was right to hold up the bill’s passage, with only 8 per cent of Labour and Lib Dem voters opposed to a referendum.

Willie Sullivan, campaign director of Vote For A Change, said:

“David Cameron’s got it wrong on voting reform. And even his own voters think so. He needs your votes to be our next Prime Minister, but he’s not prepared to give you a say on the future of your democracy. Trust is a two-way street.

When asked about reform of the Lords, the pattern is repeated. Fewer Conservative voters backed David Cameron’s plans that new hereditary peers should continue to be brought in to maintain their number at 92, by 46:42; overall, only 23 per cent of the public support Cameron’s plans.

“In a matter of weeks this referendum faces a new barrier – The House of Lords. Cameron shouldn’t let his unelected friends in that Medieval Chamber block the modernisation of a Victorian one.”