Gordon Brown put internet connectivity at the centre of his manifesto today in a speech which aimed for "Britain to be the world leader in the digital economy". 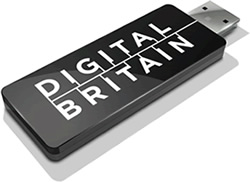 Gordon Brown put e-government and internet connectivity at the centre of his government manifesto with a speech earlier today underlined by an ambitious aim for Britain to be “the world leader in the digital economy”. In order to understand the ramifications of the prime minister’s speech it is necessary to break the relevant elements down into three key points.

Firstly, in terms of Brown’s plans for universal connectivity of the population, there was nothing new to be disclosed. Left Foot Forward previously analysed Labour plans in this area – Darling’s broadband policy: too slow, too little and too late. Left Foot Forward found that the plans put in place had an investment that was too small and lacked ambition in comparison to other countries around the world. Whilst some have touted 4G wireless broadband as a possible solution, the current consumer sentiment towards wireless communications masts in the UK make this little more than a pipe dream.

The issue of connectivity is further muddied by the draconian measures of the Digital Economy Bill. The practical effect of this will keep e-government service access away from both the poorest members of our society and many middle-class families creating a new digital under-class which the government plans fail to address.

A more welcome part of the speech was for the overhaul of the Directgov site. A quick exploration of the site provides an ample demonstration of how poor the user experience currently is and the government wouldn’t have to set the bar very high in order to improve on it. The proposed MyGov site is designed to provide users with a personal portal to government services in a similar way to online banking or an eBay account. A key part of this is the use of open source software rather than proprietary platforms, which should help with both a better quality service and one that is deployed cheaper due to the lack of expensive software licenses.

There are some consequences to consider in this process. Mr Brown’s desire to “shake up” Whitehall and provide “the most efficient, open government in the world” implies that a number of jobs would be made redundant, particularly in frontline customer care roles. Given that increases in public sector employment have acted as a counterweight to private sector lay-offs, the digital initiatives may send unemployment numbers spiralling upwards.

The final element of the Brown speech was that of open data, the movement to opening government data has been championed by The Guardian over the past few years and echoes work done by the Obama administration. Mr Brown’s speech is very similar in tone and scope on open data to the Conservative technology manifesto. The work that the current government has already done on this deserves praise.