Revised figures show the UK economy grew by 0.3% in the last quarter of 2009, not 0.1% as previously reported, due to faster growth in services & manufacturing. 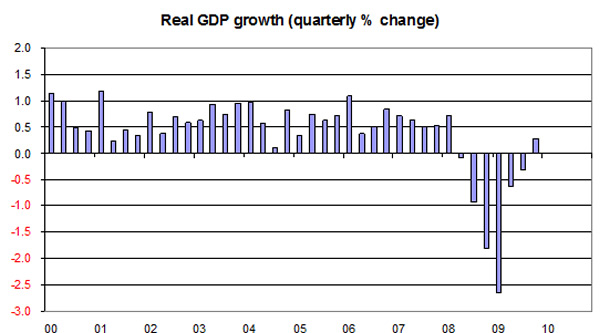 Revised figures show that the UK economy grew by 0.3% in the final quarter of 2009, not 0.1% as previously reported. The revision was due to faster than expected growth in both services and manufacturing in December.

The Index of Services for December rose by 0.6%, while the Index of Production (which measures the output of manufacturing and utilities) increased by 0.5%. These figures were not available when the preliminary estimate of overall growth was reported.

However, the decline in gross domestic product during the recession has been revised up to 6.2%, from 6%.

Meanwhile, the composition of growth in the final quarter of 2009 will have been disappointing to those hoping for a shift in the balance of the economy. Consumer spending increased by 0.4%, while business investment contracted by 3.1%. And, although exports increased by 3.7%, imports grew by 4.1% and so net exports subtracted 0.2pp from growth.

Although other economic data also show the economy was improving in the final quarter of 2009, in particular unemployment stopping falling, it is too soon to be sure that the economy is safely out of recession.

Growth in the first quarter of 2010 could be very weak as a result of the bad weather, which will have affected construction activity for example, and if the increase in the main rate of VAT from 15 to 17.5% in January caused some people to bring spending forward into the final months of 2009.