Just two days since the "Robin Hood" tax launched and already 23,000 people have voted in favour on the campaign's online poll. A deal could be reached in June. 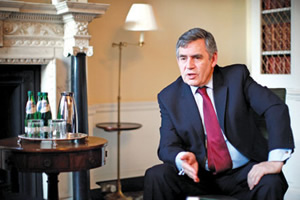 It is just two days since the “Robin Hood” tax launched and already 23,000 people have voted in favour on the campaign’s online poll: 13,000 signed up by email and 21,500 joined the Facebook Fan page.

The Financial Times reported yesterday that Gordon Brown believes the IMF will endorse a global bank levy before its April meeting in Washington, and that an agreement in principle can then be agreed by world leaders at the G20 summit in June.

It follows his response to a question tabled at Wednesday’s PMQs, in which he stated his belief that:

“We will reach agreement on a global financial levy … I believe that we will be able to go ahead with it in the not too distant future.”

Despite being backed by more than 350 of the world’s leading economists and world leaders, the response from the right-wing blogosphere has been predictably lamentable.

Conservative Home led with a blog that described the tax as a “fairytale” that “won’t help anyone”, with centre-right ‘non-party political’ thinktank Reform calling it “hopelessly naive”.

Meanwhile, perhaps taking the Tea Party “revolution” as their inspiration, a “The Robin Hood Tax is a stupid idea!” Facebook page has been set up. It has 31 fans. It appears to be an aggregator of some of the Tory blogosphere’s reaction to the tax.
Here is a selection:

• “The last thing we want is to increase benefits or money to those out of work. If it is to be used to help prevent climate change, as I read elsewhere, do we really need another ‘Green Tax’ from this government?”

• “The Robin Hood Tax is just there for socialists and other Trots to latch on to a figure of public hatred and propel their communist views” – Cardiff Blogger, ranked 26th top Conservative blogger (by Total Politics)

• “Even though I fear that wading in may make it look even more like the Tory Bloggers have received their marching orders on the Robin Hood Tax I’m going to add my two cents (or should that be 0.005%) to the general condemnation of it” – “Stratford Conservative“

There are a few common themes running through their arguments which are worth addressing.

Claim #1: It will harm the economy

Nobel Prize winning economist Joseph Stiglitz said this of short-term trading in an interview with the Evening Standard:

“Does anybody seriously believe that anything happens because of the sort of micro-second trading we’re now seeing? It’s a function of speed. No investments are being made as a result of it, no jobs are being created.

“Finance has a vital socially important role to fulfil, which is to raise capital, to run payment systems, to oil the wheels of everything society does. But the bankers fail to perform that socially useful function — and because of that, the world’s economy has suffered.”

Claim #2: It will harm ordinary consumers, including ‘holidaymakers when they exchange money at the airport’

“The Robin Hood Tax will not impact on personal banking or on retail banking. That’s because it targets a distinct area of bank operations – high-frequency large-volume trading, undertaken by financial institutions in the ‘casino economy’.

“If you change money to go on holiday, send remittances abroad, invest in a pension fund or take out a mortgage, you will not be affected by this tiny tax.”

Claim #3: It will never work because a global agreement will not be reached

Gordon Brown said in PMQs that it “must be done by countries working together” – and with Germany and France having previously backed the idea, and the PM speaking of an agreement at the next IMF and G20 meetings, a global bank levy is closer now than at any time since James Tobin proposed the idea.

Adam Lent, the TUC’s head of economic and social affairs, has argued that if enough momentum could be built up to bring the US and Japan on board, then:

“The biggest financial centres will be covered making it very difficult for financial companies to avoid the tax by shifting transactions or operations elsewhere.”

The campaign itself stresses unilateral action could be taken, proposing that:

“While an internationally agreed tax system is the best way to proceed, the UK Government and European Union should start extending transaction taxes already in existence, such as the UK’s 0.5 per cent stamp duty on shares.”

To conclude, no one in favour of the Robin Hood tax is arguing that it is the magic bullet in the war against poverty. The same organisations involved in pushing this campaign have long argued for reform of the international institutions governing globalisation, a fair global trade deal and a fair global deal to tackle climate change, and they will continue to do so.

There is no contradiction, however, in also trying to seize a once-in-a-generation chance to build an opportunity from crisis and push for £400 billion. This is and idea whose time has come.