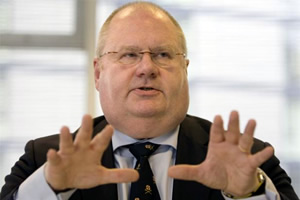 Left Foot Forward was alerted to the private discussions by an email from an anonymous blogger describing themselves as “A Tory Friend” which read:

“Eric Pickles and the CCHQ press team told the bloggers they would be given 7am briefing emails or “talk point memos” during the election campaign which would include the days lines and strategy and rebuttals to Labour attacks.”

Shane Greer, who was at the event, denied that bloggers were offered morning emails but told Left Foot Forward:

“Eric Pickles described the role he thought bloggers could play in key marginals to rebut Labour lies where they cropped up.”

Harry Cole, aka Tory Bear, told Left Foot Forward that Pickles said it would be:

“This is going to be one of the nastiest, most brutal campaigns in recent history. And that’s where you come in…”

And a hungover Thomas Byrne, who left the drinks at 2am, said he did not want to comment as he, “was not sure what was meant to be said.”