When asked what they think of themselves as, more people identified as Labour than Tory by 37% to 31%, with the Lib Dems on 18%, of those who gave a preference. 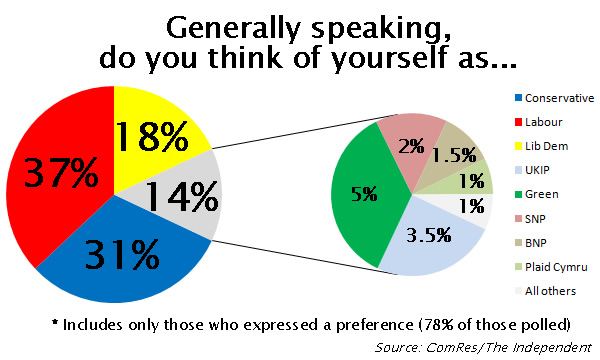 Yesterday’s ComRes poll for The Independent, criticised by UK Polling Report, Political Betting and Iain Dale for a flawed model of quesitoning on David Cameron’s economic policies, does, nonetheless, contain some worrying findings for the Conservatives.

The headline figure shows the Tory lead down slightly, from nine to seven points, with their support unhchanged at 38 per cent, Labour up two to 31 per cent and the Liberal Democrats stuck at 19 per cent. The underlying data, however, reveals even more good news for the Government.

When asked what they think of themselves as, more people identified as Labour than Conservative by 28% to 24%, with the Liberal Democrats on 14%. When those who fail to express a preference are stripped out (22% of the sample), Labour’s lead over the Tories increaes to 37%:31%.

Aside from the question about whether David Cameron should be clearer about what he would do about the economy (82% agreed he should), 37% agreed that the Government can take credit for getting Britain out of recession, 69% disagreed that the recession would have ended sooner if the Conservatives had been in power and only 52% disgreed that they could trust Gordon Brown more than the Tory leader to help Britain’s economy to recover.