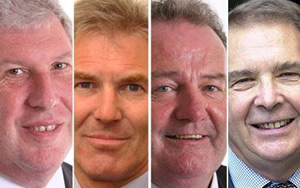 • Labour MPs Elliot Morley, David Chaytor and Jim Devine, and Tory peer Lord Hanningfield were today charged with false accounting over their expenses claims. The four were served the day after Sir Thomas Legg published his long-awaited report into expense abuses, ordering 350 MPs to pay back more than £1 million.

Among the items not judged “wholly, exclusively and necessarily” to have been incurred by MPs in performing their duties were:

The “House of Commons Banqueting Office Function List” was also published yesterday, detailing event and function bookings made by MPs on behalf of outside organisations. It revealed that Patricia Hewitt, one half of the “Dumb and Dumber” plot, booked Commons rooms five times for companies she had financial interests in – including BT, who pay her £100,000 a year as a senior independent director.

• Chris Grayling was carpeted for his manipulation of crime statistics for cynical political gain, with everyone from the chairman of the UK Statistics Authority (UKSA) to the BBC’s Home Editor putting him in his place. Sir Michael Scholar, UKSA chair, wrote to the Shadow Home Secretary warning him to “take account” of their views before mouthing off in future:

“I do not wish to become involved in political controversy, but I must take issue with what you said yesterday about violent crime statistics, which seems to me likely to damage public trust in official statistics…

“I would be grateful if you would take account of our views in your future use of, or comments upon, these official statistics.”

On Wednesday, Left Foot Forward rebutted more of Grayling’s false claims – pointing out that the experiences of under-16s are included in the British Crime Survey and that murder and manslaughter have both decreased; and today, we exposed Tory MP Justine Greening for her false claims on burglaries in Putney.

• The Northern Ireland talks on devolution of policing and justice powers finally reached agreement at midnight last night, paving the way for the full devolution of all powers envisaged in the Good Friday Agreement 12 years ago. Subject to the assmebly rubber-stamping the deal on March 9th, the powers will be transferred on April 12th.

Seventeen years on from then SDLP leader John Hume’s meeting with Sinn Fein leader Gerry Adams in his Derry home, it looks like the long and winding road to peace has finally reached its destination.

Former Tory leader Iain Duncan Smith, who joined in the chorus of criticism against Chris Grayling’s misuse of crime stats this week. He told the BBC’s Mark Easton:

“The Centre for Social Justice [IDS’s new think tank] has long understood the inaccuracy of directly comparing present crime levels with those published before the National Crime Recording Standard (NCRS) was introduced – which as you note changed recording methods significantly and has rendered direct numerical comparisons with pre 2002/03 levels inaccurate.”

Labour Deputy Leader Harriet Harman, whose proposed process for passing the Wright reforms of parliamentary reform, as Left Foot Forward has detailed, have been criticised by Labour MPs, Martin Salter saying “Harriet Harman has bottled it”.

Even Speaker John Bercow entered the fray, The Times reporting that “it was ‘impossible to overstate the importance’ of the reforms for the image and working of Parliament after the expenses scandal. Voters would believe MPs were in denial if they failed to approve the ‘shrewd and innovative’ proposals designed to relax the grip of the whips over the Commons”.

Following George Osborne’s announcement on Sunday that he intended to end BT’s “local loop monopoply” becuase it “holds back” comapanies like Carphone Warehouse (CW), Left Foot Forward revealed that CW’s founder David Ross – a close friend of David Cameron – had donated more than £130,000 to the Conservatives.

Ross had previously been forced to resign as an adviser to Boris Johnson after breaking stock exchange rules by using £157 million of company shares to prop up his declining property empire.

In a new feature on Look Left, Conor Pope, one half of the “Audacity of Pope” blog, takes a sideways look at the week just past. In this week’s episode, Pope Jnr. talks about Pope Mon-signor, crazy Clare and the most annoying man on television, Piers Morgan:

It’s the issue that just keeps coming back, and back, and back again, no matter how much MPs might wish it away; here are the latest tweets on the expenses scandal:

@Daaniyal_star: Sir Paul Kennedy should be fired and banned from serving Parliament are trying to whitewash the investigation #legg #expenses

@rastansaga360: When the ‘Westminster Four’ attend magistrates court on March 11th – dare they claim the travel costs on expenses? #expenses

@whiteorcastweet: A politician is someone who will break your legs, say “Lean on me” and expect a thank you. #expenses

@carlmaxim: Lord Hanningfield was Tory spokesman for Innovation. Maybe he was a little too innovative in his claims form. #hanningfield #expenses

@LynnCherylEde: Some #MPs criminally charged this morning by CPS are giving more int’views, bleating, whining again. Save it for court I say. #expenses

9 Responses to “Look Left – The Week in Fast Forward”