MPs face a key test when they vote on an amendment which could outlaw the construction of highly-polluting power stations like the new coal plant at Kingsnorth. 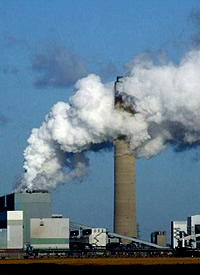 MPs face a key test of their commitment to clean energy and tackling climate change on Wednesday when they vote on an amendment which could outlaw the construction of highly-polluting power stations such as the controversial new coal plant E.ON still want to build at Kingsnorth in Kent.

Secretary of State Ed Miliband was widely applauded last autumn when he announced that the only future for coal-fired power stations in the UK will be with technology to capture and store the CO2 that they produce.

His Energy Bill, which reaches report stage and third reading this Wednesday, includes a clause to introduce a levy on consumer bills to pay for demonstration projects of new carbon capture and storage (CCS) technology.

However, the Bill does not currently guarantee that if CCS fails to work – if it is not proved to be technically or economically viable – new plants will be prevented from emitting high levels of CO2 indefinitely.

New Clause 6, tabled by Alan Simpson, closes this loop hole. The Clause creates provision for Emissions Performance Standards to limit the CO2 from any new power station. Such a standard already operates successfully in five US states including California.

The level of emissions permissible would reduce over time depending on the type of power station, the best technology available, and in line with recommendations from the Government’s independent advisors the Committee on Climate Change.

Stopping Kingsnorth last year was hailed as the British climate movement’s greatest victory, but without the new amendment, Kingsnorth and dirty power plants like it could still be built and allowed to emit high levels of climate pollution for years to come.

The Government agrees that ultimately regulation will be needed, but campaigners from across civil society including WWF, RSPB, Oxfam and Greenpeace argue clear limits on emissions must be agreed now because a clear limit on emissions from the start would provide investment certainty, and reduce the risk of future governments being forced to decide whether to close heavily polluting plants once they are operational.