Lib Dem schools spokesman David Laws has praised Labour's record on education - in particular the improvement of pupils' performance in the poorest schools. 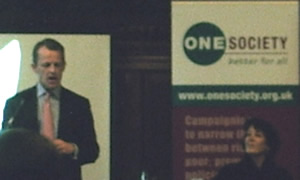 Liberal Democrat schools spokesman David Laws has praised Labour’s record on education – in particular the improvement of pupils’ performance in the poorest schools, which he describes as “astonishing, dramatic, unbelievable”.

Mr Laws was speaking at the launch of Demos’s “Politics of Fairness” policy proposals in Parliament today. He said:

“There has been a breathtaking rise in performance in education since 1997. Inner London was a basket case pre-97; ninety per cent of students were failing to get decent grades at 16 back then.

“The improvement’s been astonishing, dramatic, unbelievable.

“Sixty per cent of pupils on free school meals in some of the poorest areas now gain five GCSEs A-C, a massive rise from 13 years ago.”

The other speakers at the event were Conservative Shadow Universities Secretary David Willetts, former Work and Pensions Secretary James Purnell and Professor Richard Wilkinson, director of The Equality Trust and co-author of “The Spirit Level“, which argued that more equal societies “almost always” do better than unequal ones.

Among the slides Professor Wilkinson presented was one showing income inequality rising sharply under Thatcher, peaking under Major, falling slightly under Blair and stabilising: 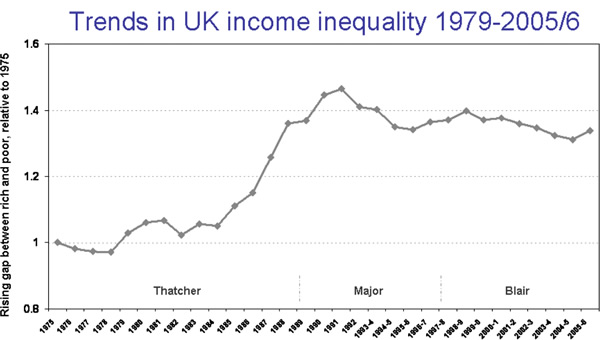 Earlier today Left Foot Forward reported on the One Society’s report into the negative impact of inequality and the recession on young people, which concluded that reducing income inequality would improve social mobility and the quality of life for all young people, across the social spectrum.

• Download the slides and the publications: Wealth of Opportunity by Julian Margo and William Bradley; Everyday Equality by Max Wind-Cowie; and Society of Equals by Left Foot Forward’s Graeme Cooke.