Further proof that the actions of Geoff Hoon and Patricia Hewitt has emerged today following the latest Populus poll which shows a Tory lead of 15 points. 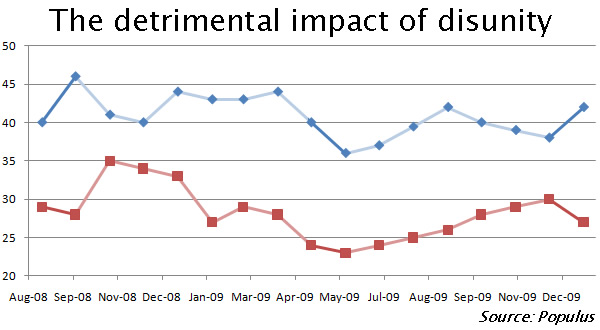 Further proof that the actions of Geoff Hoon and Patricia Hewitt have damaged the Government emerged today following the latest Populus poll for this morning’s Times, which shows the Conservatives on 42 per cent and Labour on 27 per cent – figures which, if repeated at the election, could see the Tories end up with a healthy Commons majority of 60.

The real impact of the disloyalty shown by Hoon and Hewitt, and disunity in general, however, can be gauged in the change in Labour support from the previous month, down 3 per cent – the first fall in the Populus rating since June 2009, the last time an attempt was made to topple the Prime Minister. Labour had risen 7 percentage points from June to December.

It has also been the most damaging of the three coup attempts, the other two, May/June 2009 and September/October 2008 having seen falls of only 1 percentage point. More evidence that disunity also benefits Labour’s opponents comes from the month-on-month increase in Tory support – up 4 per cent, their biggest rise in this series since a six-point rise in October 2008.

Among other headline figures from today’s poll are the respondents’ answers on how they perceive the two main party leaders and the Conservatives’ marriage tax proposals.

On the Tories’ marriage tax plans – which Left Foot Forward examined last week – 57 per cent of the public think it “would be unfair” for government to promote marriage through the tax system compared to 40 per cent who think government “should actively promote and encourage marriage”.