Questions will also be asked as to how, if he's too busy to chair the MPA, he is able to write a weekly column for The Daily Telegraph - at a salary of £250,000 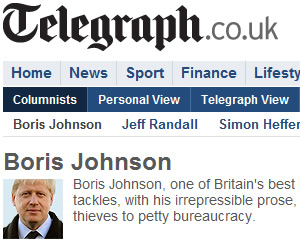 Boris Johnson is under mounting pressure to explain precisely why he has stepped down as chair of the Metropolitan Police Authority (MPA) – just 15 months into the role and less than two years after being elected on a manifesto which pledged to “provide strong leadership” by “taking responsibility and chairing” the MPA.

It was one of five pledges made by the Mayor, the failed fulfilment of which calls into question his ability to meet the other four promises he made, to make public transport safer, tackle gun and knife crime, help the victims of sexual violence ,and provide an accountable police service.

Questions will also be asked as to how, if he’s too busy to chair the MPA, he is able to write a weekly column for The Daily Telegraph – at a salary of £250,000 – a point made by Liberal Conspiracy and in a comment on The Guardian:

“Isn’t the important point that Boris spouted on about how he would chair the MPA in his manifesto and has now gone back on that promise? Not enough time indeed? He manages to find the time to write his chicken feed Telegraph columns doesn’t he?”

Last week, the Mayor’s ‘island airport’ idea was slapped down by David Cameron, who said it was “not our policy”, adding:

“Building airports is not his responsibility”

And yesterday he refused a Freedom of Information Act request to release secret correspondence between himself and Prince Charles regarding “hugely sensitive planning decisions and major financial and political deals”, with today’s Standard asking:

15 Responses to “If Boris is too busy for the police, where does he find time to write his £250k Telegraph column?”