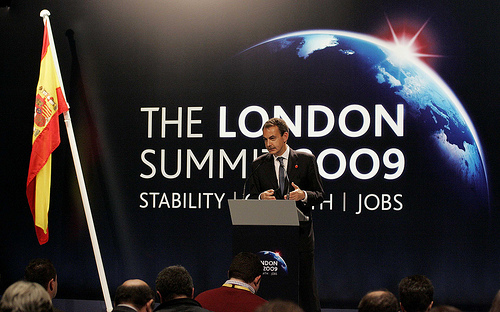 At PMQs today, Gordon Brown answered a question about G20 countries and the recession by saying:

Quick as a flash Tory Bear posted an article demanding an apology from Brown after saying he “lied to the House”.

So who’s right? Our facts on growth were a bit old yesterday but we did say:

“Spain, who attend G20 meetings, are also still in recession.”

Spain is not a formal member, as TB noted, however they did attend the London and Washington summits (see pics) and would like to attend the G20 again as the EU’s rotating president in the first half of 2010.