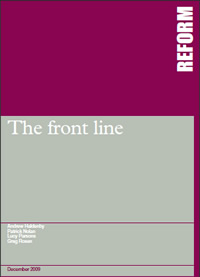 Right-wing think-tank Reform has produced a new report, “The Front Line”, calling for a million fewer public sector workers – a 15 per cent reduction in the public sector headcount. They say this will reduce public spending by £27 billion a year.

Progressives should be grateful. It used to be said that the job of think-tanks was to think the unthinkable. But their more useful function is to say the unsaid. This is what Reform has done with this report.

Politicians across the piece like to tell us that big public spending cuts are inevitable if we wish to reduce the deficit. But, they say, they will protect front-line services.

Reducing waste, greater efficiency, cutting top pay and pensions, and reducing the number of bureaucrats can all achieve the savings needed. And best of all hardly anyone will notice as front-line services – and even whole sectors such as health – will be immune.

Reform explodes this myth. This is a proper rigorous analysis from the small-state right. It is valuable because it shows what is likely to happen if a future government was to close the deficit by slashing public spending.

It accepts that this government has increased spending on the front-line, and that the only way to shrink the state is to reduce public services big time.

“Contrary to popular perception, the great majority of the public sector workforce are (sic) front line workers. Of the 1.4 million people working in the NHS, for example, only just over 200,000 provide administrative support.

“Since 1999, the central civil service has grown by 5 per cent compared to a 30 per cent rise in the NHS headcount.”

Reform has a track record here. Their report “The End of Entitlement” made a similarly rigorous call to slash state help for middle income and rich Britain:

“The cost of middle class welfare amounts to around £31 billion per year. The most generous benefits to the entitled classes include the Child Benefit, Child and Working Tax Credits, Retirement Pension and Winter Fuel Allowance and Statutory Maternity Pay.

“Faced with the alternative of even more significant tax rises, middle class welfare must be cut back to help restore the public finances and put welfare on a more sustainable footing.”

And they deserve bonus points for not using middle class as a euphemism for the not-quite-super- rich. They really do mean middle income earners on just over £21,000 a year.

The danger now is that this report does not get the circulation it deserves. None of the parties want to spell out what impact their cuts will have on public services or how many fewer public servants there should be. Whatever you think of the salary packages of top civil servants or council chief executives, even halving all their pay makes little impact on public expenditure as a whole.

It is particularly hard for the Conservatives. After all David Cameron personally intervened to save the candidacy of Reform’s deputy director from Norfolk’s so-called turnip Taliban. If they do not share Reform’s analysis then they need to say so.

But Labour is just as guilty of talking up the false dichotomy between front-line workers and back-room bureaucrats. Indeed they have at times promoted the use of back room support to free up the time of those on the front-line, so that, for example, police officers don’t handle paper-work that others could do. Sack the (cheaper) support staff, and the police officers are back at their desks.

And of course if you can’t close the deficit through painless invisible cuts and economic growth alone, then the only route left is tax. Labour has developed some confidence in this area, and we will see whether it goes any further in tomorrow’s PBR.

But it is extremely difficult for the Conservatives who are stuck with their pledge to reduce inheritance tax and many of whose activists have cutting tax hard-wired into their psyches.

Those of us who believe in decent benefits, good pensions and properly funded public services paid for by a fair tax system should welcome this report for clearly setting out the real choices. We should join hands with the small state right to make sure that its analysis is not brushed aside by those who do not want clarity in the big debate facing the nation.

Our guest writer is Nigel Stanley, Head of Campaigns and Communications at the TUC

6 Responses to “New Reform report should be welcomed by progressives”