The Irish economy, so beloved of the British Right, is in dire straits compared to our own, with unemployment at 12.5pc, GDP down 7.4pc and deflation at -6.6pc. 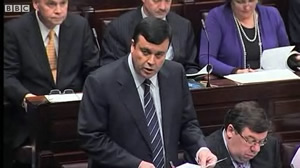 As Alistair Darling delivered yesterday’s PBR with the themes of investing in growth, taxing fairly and safeguarding the recovery, quite a different budget was delivered in Ireland.

The measures were praised by Tory bloggers and politicians and gave a taste of what a future Tory budget might look like. George Osborne has long been a supporter of Irish policy, stating in February 2006 that:

“Ireland stands as a shining example of the art of the possible in economic policy-making.

“With its vision of a highly-educated, innovative, open, dynamic, low-tax economy, and relentless focus on the long-term drivers of prosperity, Ireland’s economic miracle has shown that it has the right answers to the challenges of the new global economy.”

“The PBR the British Chancellor should have delivered, was delivered yesterday in Dublin. Hopefully George Osborne is studying it in great detail.”

The results of Ireland’s policy are plain to see:

• The country is experiencing deflation at –6.6 per cent;

• And despite the cuts they have still had their credit rating downgraded.

But what exactly are the measures that the Tories are so keen to praise?

– Unemployment benefit is being cut by 4.1%, with larger cuts for those under 25.

– Prescription charges are being increased by 50%.

– Other increased health charges including A&E, inpatient and outpatient charges and a higher monthly threshold above which people cannot get free drugs under the Drug Payment Scheme.

– Further departmental cuts will be announced in coming days.

– €960mn is cut from the investment budget

All the world’s major economies have had their public finances damaged by the global recession. And now all must take steps to rectify them. Alistair Darling made the tough choices necessary to halve the deficit over the next Parliament yesterday and did so guided by the principle of fairness.

The Irish, egged on by the Tories, have instead opted to attack the poorest in society; as Irish Labour Leader Eamon Gilmore has said:

“This is a budget that is viciously anti-family, fundamentally unfair and socially divisive.

“Everyone knew that a tough budget would be required because of the unprecedented economic shambles created by Fianna Fail over the past twelve years, but few people could have anticipated a budget that would be so lacking in fairness.

“Arguably the Irish bond market is being saved at the expense of Irish society.”

O’Sullivan, 38, author of a 2006 book on Ireland’s economy, added in the interview at Bloomberg’s London bureau that:

“By cutting spending you lower the trend line of growth and store up bigger fiscal problems down the line.”

The economic and social disaster occurring across the Irish Sea is an important reminder of exactly what Osborne’s plans mean.