The bookies favourite Carwyn Jones has been formally declared as the next leader of the Welsh Labour Party. He won 52 per cent of the vote in the first round. 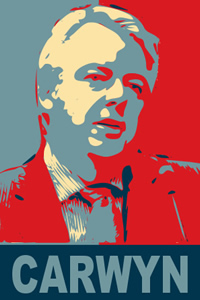 The bookies favourite Carwyn Jones has been formally declared as the next leader of the Welsh Labour Party.

The contest was triggered by Rhodri Morgan’s decision to stand down after 10 years at the helm of the Labour Party and the Assembly Government. The Welsh Assembly Member for Bridgend, Counsel General and Leader of the House comprehensivly beat his rivals, Health Minister, Edwina Hart and Myrther Tydfill and Rymney AM, Huw Lewis on the first round of voting.

Last month, Left Foot Forward profiled the man who would be leader. Born in Swansea with a background in law, Jones has held a string of ministerial posts since the Welsh Assembly was established in 1999. Most notably, during his period as Minister for Rural Affairs, he led Welsh efforts to combat Foot and Mouth disease in 2001.

Accepting the post, Jones repeated his campaign pledge to be a leader for the whole of Wales. He continued:

“We have to make sure that we listen to people, that we keep our promises. I want my country to succeed. I want to make a difference to the lives of the people of Wales. I am proud to be Welsh, I’m proud to be British, and I’m proud to be Labour.

“We know there’s a difficult task ahead. But tonight let us say that in this building at this event, that tonight our fightback starts.”

Among some of his key campaign pledges were commitments to:

“Welsh Conservatives congratulate Carwyn on his victory. We also wish to pay tribute to Rhodri Morgan for his decade of service and for his commitment to his party, to the assembly and to Wales.

“We are pleased two months of political uncertainty and drift has come to an end. For far too long Labour has been distracted by political ambition.

“It is vital the assembly government quickly gets back to business to address the many problems facing Wales today.”

The new Labour Leader is due to be confirmed formally as First Minister by the Assembly in a vote next Tuesday. Between now and then, he will be working to form his first Cabinet.

Last week, former Welsh Secretary, Paul Murphy, called on whoever won the contest to include both their rivals in their cabinet for the sake of unity. However, WalesOnline has reported splits within Jones’ camp over whether to offer Huw Lewis a place in his Government.

Mr Jones takes over at a turbulent time for his party. Just six or seven months away from what will be tough elections for Labour, during the European Elections in June, the Conservatives came ahead of Labour for the first time since 1918.

A further challenge for the next First Minister will be filling the shoes of his predecessor. In October, despite being in office for 10 years, Rhodri Morgan’s approval ratings were at 63 per cent. Jones’ election is particularly significant given that if Labour were to loose the next General Election, he would become the most powerful elected Labour politician in the country.