The apparent depiction by Cameron of the £6,500 loan as a grant is either a serious misunderstanding or disingenuous politics; this is a debt, is not a grant. 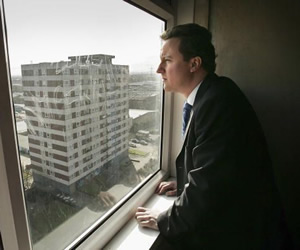 The implications of David Cameron’s comments on green homes in Wednesday’s Guardian are becoming clearer. Previous announcements have alluded to what the Conservative plans would involve and the slow drip of information continued on Wednesday; if the Conservative Party wins the next election they will scrap grant payments for improved heating and insulation – the only means by which disadvantaged households can access assistance to achieve a warm and healthy living environment.

The announcement was the first public confirmation that Conservative plans for tackling carbon emissions are designed purely to attract wavering but affluent Liberal Democrat and Labour voters.

Meanwhile, the scrapping of assistance designed to reduce energy bills and improve the quality of life of poor and vulnerable households provides a glimpse of what compassionate conservatism may actually mean.

Whilst there are many faults with the approach to grant schemes such as Warm Front under the current government there is at least an understanding of the need for grants to support those in no position to help themselves.

Many of the problems with Warm Front have been addressed and resolved including increasing the maximum grant, improved contract management, boosting competition, and improving standards of work, but there is still a long way to go. However previous issues around the delivery of Warm Front should not be used as a justification for the ending of grants.

Nor will anyone be persuaded by the glib and complacent assurance that all those in need of assistance have already benefited. This is self-evidently untrue as 6 million fuel-poor households can testify. National Energy Action (NEA) analysis of the English House Conditions Survey shows that of all the vulnerable fuel poor households, 34% still have an unfilled cavity – that’s 765,000 households.

Whilst 2 million vulnerable households have been helped under Warm Front since June 2000, they have not all been removed from fuel poverty and this is a major failing of the current grants system. A coherent programme would involve implementation of all feasible and cost-effective measures to ensure that energy costs of those vulnerable households were reduced to a point where they would be removed from fuel poverty.

Failure to adopt a comprehensive programme meant a missed opportunity to comply with fuel poverty targets set out in the Warm Homes and Energy Conservation Act. The Conservative answer to this failing seems to be the incomprehensible and unacceptable decision to scrap grants altogether rather than attempt to resolve the failings and wasteful delivery model of existing schemes.

The BBC article covering the announcement is in itself a cause for concern on several levels. It is either an example of poor journalism or the Conservatives are presenting a misleading description of the implications of the announcement.

The apparent depiction by Cameron of the £6,500 loan as a grant is either a serious misunderstanding or disingenuous politics. At best it could be a mistake by the BBC who have failed to understand that the proposals are offering debt to households.

At worst it is CCHQ attempting to describe their proposals as something they are not. This is a debt and is not a grant.

The details of the Conservative proposals must be subject to serious scrutiny. For example, if the householder is paying off £120 per year on a £1,500 loan it will take at least 12½ years to pay back. When you take into account the interest on the loan that the likes of M&S and Tesco will earn, say 7%, you are looking at more like 20 years to repay. Does this really represent an attractive offering?

A quick glance at the projected savings under the Tory plans (they have yet to publish any key details or analysis) shows they predict savings of £360 per year on the average energy bill from standard insulation measures. Analysis by National Home Energy Rating (NHER) shows savings for standard measures might average around £182 per year.

NEA’s initial interpretation on the limited information currently available on the Conservative plans suggests that up to £250 may be possible. This undermines the Conservative line that there will be substantial reductions in fuel bills and that only a small proportion of that saving would be taken up by the repayment of the loan (Conservative data suggest 33%; the NEA figures suggest 48%; and NHER figures 66%).

There was an assumption that political consensus had been achieved on fuel poverty, that energy efficiency was the most rational and sustainable solution and that those who could not afford to invest in heating and insulation improvements would be supported by Government. Seemingly this is not the case.

David Cameron’s sound bite on the BBC site was:

“If we make the answer to climate change sound like sitting in a dark room with a big woolly pullover on, with the heating turned down, with our teeth chattering and being miserable, then we’re never going to sell it to anybody.”

Unfortunately, Cameron’s imaginative picture may prove to be the reality for millions of disadvantaged and other vulnerable households.