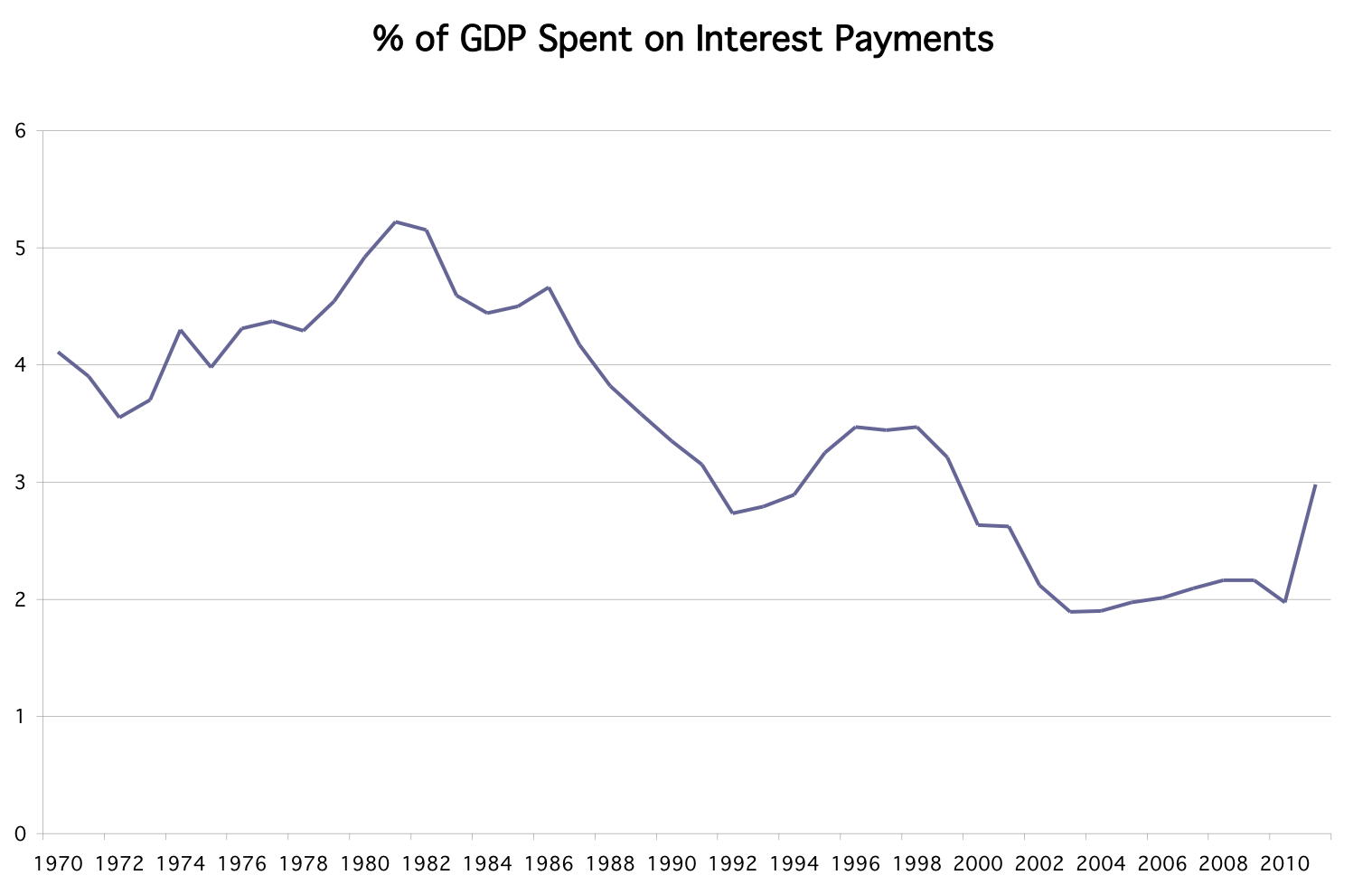 Neil O’Brien, of Policy Exchange, has written an article for ConservativeHome on the current deficit situation. Not only is it factually incorrect, its prescriptions are downright dangerous.

“The interest on all this debt will not be cheap. Soon, 9p in every pound of tax we pay will be spent not on public services, but on servicing debt interest. We will be flushing £50 billion a year down the toilet – more than we spend on schools.  That’s real “government waste” for you.”

However the interest on this debt is cheap. While debt may be higher than in the past, the interest rate paid on government debt is at record lows. As the chart below shows, the percentage of GDP spent on interest payments is projected to be less than 3 per cent to 2011. This is well below levels experienced as recently as the 1990s and less than when Labour came to power in 1997.

“Sorting out the deficit promotes growth and recovery – particularly by enabling a looser monetary policy than would otherwise have been the case.”

Despite O’Brien’s claims that we currently have overly loose fiscal policy, the Bank of England base rate stands at 0.5 per cent (a record low), the BOE is engaging in a policy of quantitative easing and 10 year government bonds yields are less than 3.75 per cent. It is difficult to see how monetary policy could be any looser.

O’Brien may favour using monetary policy to respond to the crisis but the IMF has argued that:

“during recessions associated with financial crises, fiscal policy tends to have a more significant impact, which is consistent with other studies that find that fiscal policy is more effective when economic agents face tighter liquidity constraints. The lack of a statistically significant effect from monetary policy during financial crises could be a result of the stress experienced by the financial sector, which hampers the effectiveness of the interest-rate and bank-lending channels of the transmission mechanism of monetary policy”

O’Brien’s second claim is that:

“The fiscal correction should be biased towards spending cuts to avoid choking off growth.”

Government spending in the last year was one of the key factors in preventing an outright depression. Significant tax rises or government spending cuts in the next year risk a ‘W shaped’ double dip recession. Does O’Brien seriously believe that removing demand from the economy (which is what spending cuts amount to) is required at this stage? With private consumption weak, export markets sluggish and business investment still falling heavily this is a recipe for economic disaster.

Once again the Conservatives, and their proxies, seek to emulate Ireland.