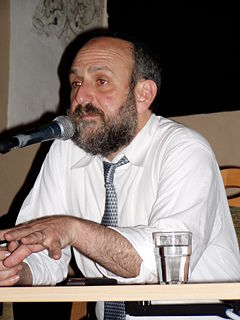 Left Foot Forward yesterday asked Poland’s Chief Rabbi, Michael Schudrich, five questions. His appearance on the Today programme this morning appears to have answered two of those questions but uncertainties remain. In particular, was Schudrich leant on to clarify the remarks he originally made to the New Statesman?

On the Today programme this morning, Schudrich said:

“Mr Kaminski, as I said previously, as a teenager did join an organisation in Polish known as NOP whch is unfortunately openly anti-semitic and neo-nazi. He also quit that organisation as a teenager. Concerning Kaminski’s commments on Jedwabne, I completely disagree with his stance.

But that is also something that we have to take into consideration that since that time he has become a strong ally of the state of Israel and on other occasions has condemned anti-semitism.

So what we have here is a complicated person. And we need to be able – in order to understand him – to understand him in a fuller context not taking one thing he said but taking a look at what he has said over the past 20 years. Not ignoring the fact that he was a member of NOP as a teenager, which was a serious thing that he did and something that I would not defend and find problematic. On the other hand, I would not define him in his totality as what he did as a young man but rather look at what he has done over the last several years and here he has been a serious ally to the state of Israel.”

This statement answers two of the questions posed by Left Foot Forward:

The row over Michael Schudrich’s blew up after the Jewish Chronicle reported yesterday that Policy Exchange had this week received an email from the Chief Rabbi. Earlier this month Toby Helm reported an incident at Conservative party conference where Dean Godson, Research Director on Foreign Policy and Security at Policy Exchange, “launched a tirade” against Vivian Wineman, president of the Board of Deputies of British Jews, and Labour peer Greville Janner, who had criticised the appearance of Michal Kaminski and Robert Zile of Latvia’s For Fatherland and Freedom party at Conservative party conference:

“Godson accused them of ‘a certain form of left McCarthyism’ and of deliberately invoking the memory of the Holocaust to harm the Tories.”

Dean Godson has been described by Spinwatch as “one of the best-connected neoconservatives in Britain.” Both he and Schudrich have been published by the Jerusalem Center for Public Affairs.

The question remains. Did Policy Exchange, the Conservative party, or the Polish Law and Justice party lean on Michael Schudrich to clarify his original statement?

The Chief Rabbi and I had an exchange of emails over the weekend:

I hope that my interview on BBC has clarified your questions.
All the best,
Michael Schudrich

Thanks very much for replying – I appreciate it.
Your BBC interview certainly clarified questions 1 & 5 but I would be interested to know whether your email to Policy Exchange (quoted in the jewish chronicle) was spontaneous or a response to communications from the british conservative party, law & justice party or the Policy Exchange think tank.
Best wishes,
Will

Several people from different backgrounds have contacted me concerning the question of Mr. Kaminski.  I listened to them all and ( as always) made up my own mind.  No one tells a New Yorker what to say ( I am originally from NY).