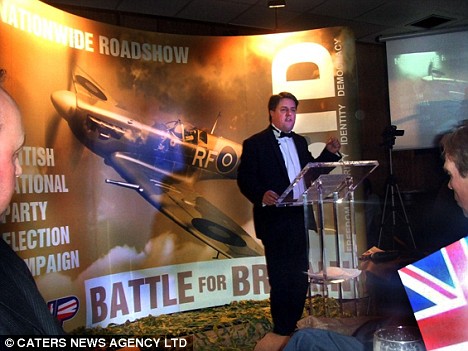 Nick Griffin poses in this picture against a backdrop showing a Spitfire and the slogan “Battle for Britain.” But the racist BNP leader reveals his historical ignorance since the “RF” on the side of the plane depicts a plane in the No. 303 (Polish) Squadron.

According to Wikipedia, the No. 303 Squadron known as the “Kościuszko”:

“was one of 16 Polish squadrons in the Royal Air Force during World War II. It is the RAF unit which scored the highest number of enemy kills during the Battle of Britain.“

The Polish crews were praised earlier today on the Nothing British website. Andy McNab said:

“That is why we won the Battle of Britain and as a country that is why we are so good because we have got such a good mix. And Nick Griffin doesn’t get that.”