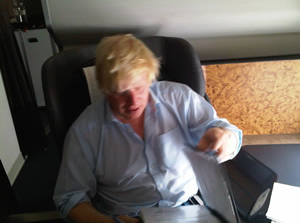 Fresh from watching his former adviser convicted of fraud yesterday, Boris Johnson faces further embarrassment with the revelation the celebrity cyclist flew to Manchester for the Tory party conference.

The Mayor of London has made great play of his green credentials, but like his leader – whose briefcase-carrying car follows him wherever he bikes – charges of hypocrisy are never far away.

Speaking at a hustings event for the Tory mayoral candidacy, he said:

“Domestic flights in this country are a crime, they are a sin. You will not find, under a Johnson mayoralty, 381 officials taking flights within this country. That’s absolutely criminal.”

Our apologies to Mr Johnson, seems he travelled to Manchester by train after all. Looks like the Mayor’s IT team made a mistake in attaching the wrong picture when tweeting “On route to Manchester, drafting speech for party conference tomorrow” on Sunday morning. Dave Hill in the Guardian has more.