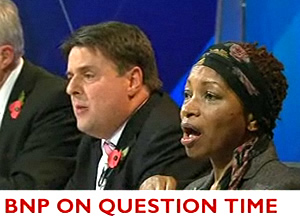 Nick Griffin today refused to answer questions from the press, choosing instead to read out a statement that claimed he faced a “lynch mob” on last night’s Question Time.

“That was not a genuine Question Time. That was a lynch mob, and, on the front page of the Times today it’s explicitly stated by the BBC that they deliberately changed the format.

“We’re putting in Freedom of Information Act requests and a formal complaint to the BBC over the way in which they twisted Question Time from what it should have been.”

His claims were denied by the BBC, however, who told Left Foot Forward:

“The questions on the programme always come from the audience which reflects a range of views and backgrounds across the political spectrum wherever the programme is filmed across the country. As ever Question Time saw tough questioning putting the panellists on the spot on a range of subjects. Clearly Mr Griffin himself and the BNP were the subject of intense questioning.

“The programme is topical and it is normal for it to reflect topics that are in the news in the week – people would accept that the BNP and Question Time have been prominent topics this week as well as Jan Moir’s article on the death of Stephen Gately which was also discussed.

“All the panellists were given the opportunity to respond to the points made and to have their voices heard. Audiences will make up their own minds from what they have heard.”

The convicted racist also turned on host David Dimbleby, who had pressed him on his denial of the Holocaust during yesterday’s show – comments about which he laughed, floundered and failed to explain.

Listen to the BNP leader’s statement in full below and read it here:

The BNP made another far-fetched claim on their website by suggesting last night’s show resulted in a “30% increase in Membership Interest”, on the ludicrous assumption that everyone visiting their site in the wake of the programme – like me for instance – is interested in becoming a member.

And Quilliam, the counter-extremism think tank, today launched a BNP awareness programme aimed at better informing the public about the BNP in the run-up to next year’s General Election, a follow-up to their recent publication In Defence of British Muslims: A response to BNP racist propaganda.