A new report by Greenpeace suggests that the cost of replacing Trident has been grossly misrepresented by the Government. While the Government has claimed that Trident will cost £13 to £20 billion, the analysis places the true cost in a range estimated from £77 to £97 billion. 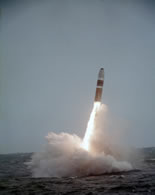 A new report by Greenpeace suggests that the cost of replacing Trident has been grossly misrepresented by the Government. The painstakingly detailed work sheds much needed light on an area of defence procurement noted for its lack of transparency. With impressive attention to detail, careful caveating and support from such cross-party luminaries as Michael Ancram and Vince Cable, the report will carry weight far beyond traditional anti-nuclear circles. Already, General Charles Guthrie, Chief of the Defence Staff under Tony Blair, has noted the need to “examine ways of delivering a weapon more cheaply” as a possible alternative to Trident.

While the Government has claimed that Trident will cost £13 to £20 billion, the analysis places the true cost in a range estimated from £77 to £97 billion. Central to the difference between the two estimates is the government’s failure to fully report the likely extent of lifetime costs of the proposed new systems, focusing instead solely on development and production costs.

Some of the key gaps in the Government’s numbers stem from the fact that much of the material that would be procured through the extension of Trident has extremely short life spans. For example, while current warheads fit onto the new missiles, these warheads will be non-operational beyond 2020 requiring expensive replacements. Furthermore, technological developments and continual research with the US may well lead to rapid disposal of the proposed new systems to accommodate new technology. The US is already working on a new missile to be produced by 2042, only about 25 years after the new Trident system is due for launch.  Much of this information suggests that not only are immediate cost estimates low, but that current estimates of future cost have been largely ignored.

The construction of a new Trident system evokes deeper questions about what kind of national security threats Britain is likely to face in the years to come and the forces Britain should possess to handle them. In light of President Obama’s decision to scrap high cost, high technology defence programmes such as the F-22 and the European Theatre Defence Missile Shield, pressure on the British Government for a real review of actual strategic needs and their genuine costs continues to build.