Lord Mandelson today confirmed that the Government was seriously contemplating holding a referendum on electoral reform. 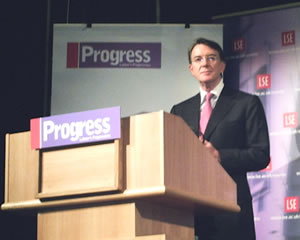 Lord Mandelson dropped another hint today that the Government is considering holding a referendum on electoral reform. Answering questions after his Progress speech at the LSE he made clear the voting system would be looked at in the coming months.

“I do think that whilst our voting system has been tried and tested and served us well through the generations – it has produced strong, majority Government with a clear view, an idea of what they stand for and with a clear sense for the public of what they can expect from those governments which sometimes you cannot get from coalitions which start with soaring vision and tremendous clarity but then, sort of, drop down to a sort of lowest common denominator form of government which leaves people both bemused and dissatisfied.

“Now, does that mean to say that there is no change that could be made in our voting system in our country so that people really feel that it’s fairer and more representive? No, I don’t think we should reject contemplating any sort of change and I think that’s something that we’re going to have to address in the coming months.”

The Business Secretary’s remarks follow an article in Friday’s Independent which revealed the Prime Minister was contemplating holding a referendum on electoral reform on election day.

6 Responses to “Mandelson: “Electoral reform will be addressed in the coming months””