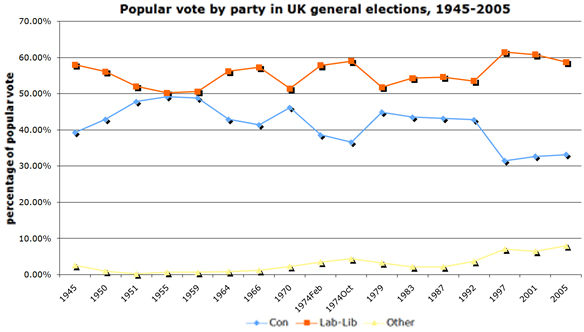 The coverage around Jon Cruddas’ speech last night has centred on his criticism of the Labour leadership or his 10–point plan for Labour’s future. But discussion at the event was more focused on a graph, presented by Cruddas, which showed the popular vote by party in UK general elections since 1832. Cruddas used the picture to support his argument that

“Labour has faced two periods of real crisis and now stands on the verge of a third. The first followed the crash of 1929, and the collapse of the second Labour government as MacDonald, Thomas and Snowden entered the National Government.

“The second came with Labour’s loss of power in 1979, the Thatcherite ascendancy and our threatened eclipse by a new third party in the early 1980s.

“Now, a third crisis is imminent. If the decline in Labour’s fortunes since 1997 continues, this latest watershed will occur following next year’s election – and history suggests that it will be every bit as dramatic.”

Polly Toynbee, in response, noted that the graph showed that the Conservative Party had never, in the post-war era, had a majority of voters. The graph below, produced by Left Foot Forward, shows the Conservative vote plotted against the combined Labour and Liberal/SDP-Liberal Alliance/Liberal Democrat vote in every election since 1945.

James Purnell, Polly Toynbee, Neal Lawson and Jon Cruddas were united last night in calling for a referendum on proportional representation on election day. With the data in front of you, it is easy to see why.