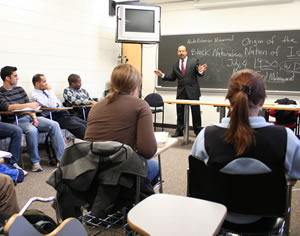 Parts of the British press are willing to stretch the facts to breaking point in their eagerness to whip up fears about immigration. The Daily Mail this week claimed that: “Overseas student surge hits 110,000: And all but a tenth decide they’ll stay in Britain”. At best, this is a serious misreading of the statistics.

This does show that there a lot of foreign students coming to the UK, but does not tell us very much about how many non-EU students stay in the UK after their courses have finished. If they leave, very few will give their reasons for migrating as ‘to undertake formal study’, since many will have completed their studies. In all likelihood, many of these students will be going home (or elsewhere) in order to take up a job or look for work – more than 120,000 non-EU nationals who left the UK in 2007 gave these reasons.

In fact, recent research from ippr shows that emigration of migrants from the UK is increasing, and that the highly-skilled (like foreign students graduating from British universities) are more likely than most to do leave the UK. Total net immigration to the UK peaked in 2006, and numbers are now falling quite rapidly, largely due to rising emigration by non-British nationals.

There has been a significant increase in the numbers of foreign students coming to the UK in recent years. Students from non-EU countries in UK higher education institutions numbered almost 240,000 in 2006/07 (up from around 110,000 a decade previously) and accounted for over £1.7bn of income for those institutions There have been abuses of the student visa system in the past, but new requirements for sponsoring institutions mean that this is much less likely to occur in the future.

And for the Daily Mail to imply that the increased numbers of foreign students are the reason for British universities “turning away a record number of UK students last year” paints a picture of the higher education funding model that few in the sector would recognise.

3 Responses to “Scaremongering about foreign students confuses the facts”