Lianne Hyslop joined her colleagues on the picket line in response to the chronic underfunding she has witnessed as a nurse. 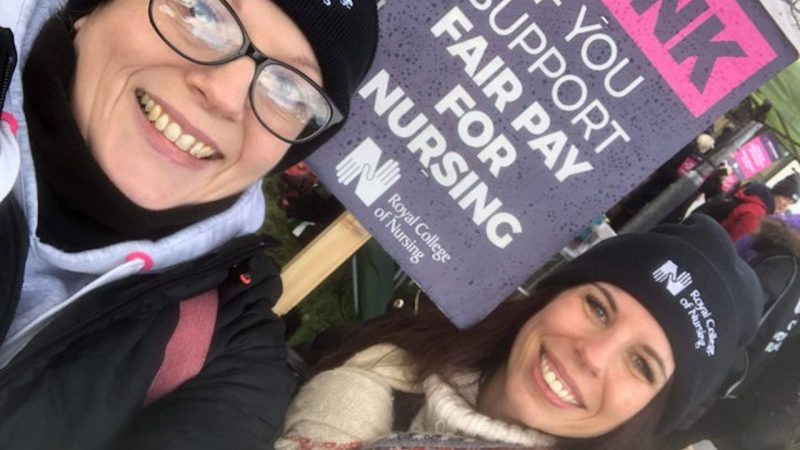 Lianne Hyslop, 43, has worked on a medical ward at the Musgrove Park Hospital in Somerset for seven years.

She joined her colleagues on the picket line in the cold this morning, and will again tomorrow, in response to the chronic underfunding she has witnessed.

As a recently qualified nurse associate, Lianne told LFF that in the last seven years she’s seen her ward decline from what used to be well-equipped and well-staffed with experienced nurses, to one that leaves her exhausted and concerned.

For Lianne, the main reason for taking strike action today is about addressing patient safety.

“We are doing the best we can, but it falls so short of what I’d want my family and loved ones to have, it’s a real concern and it takes its toll emotionally every shift,” Lianne said.

“I don’t think anyone can argue that the pay does not reflect the job, but for me and a lot of my colleagues it’s about witnessing the poor standard of care that we are having to deliver. That’s not why we came into nursing.”

She added: “It’s not a job you leave at the end of a shift thinking, I’ve done a good job today. There’s no recompense for it.”

Her ward, which works with surgical and medical patients, used to operate on a one nurse to eight patient ratio, but it’s now not uncommon for a single nurse to have 12 patients.

But despite the difficulties faced, she commended the fantastic work her ward do and the support offered by the Somerset NHS Trust, however she is disappointed this not reflected on a national level.

“I think the government is acting incredibly short sightedly, not being willing to open negotiations or even discuss pay.

“We have an awful amount of support from the public and I think it’s not unfair to ask for a conversation, but they can’t even get to the table. And when they say that progress is being made, when progress isn’t being made, that’s disingenuous and dangerous.”

She emphasised that not one member of staff with her on the picket line today wanted to be there.

“And there’s not one member of staff on that picket line that I know of who wasn’t checking in with their colleagues to make sure their patients were ok.”

“We’ve been working at unsafe staffing levels for the longest time now and that’s why the strikes are happening, it is unsafe. I’m not sure how that message isn’t getting across.”

Lianne herself is leaving the NHS for a private practice, despite her love and support for the public health service.

As a mature student and a single mother of three, she cannot secure the funding necessary to take her foundation degree to the next level and she can’t afford to self-fund it.

“I’ve managed to secure a job in a private practice which I’m incredibly proud of, but I feel really conflicted leaving the NHS, it was never something I wanted to do.”

She joins the ever growing number of nurses she knows who have already left.

“A lot of nurses say they need to protect their work life balance and can’t afford to stay because of this. We are also looking at patients suffering every day and that takes its toll.

“I believe there will be a mental health crisis because of this and it’s the patients who will suffer.”

Lianne will join thousands of nurses across the country on picket lines again tomorrow, for the second day of their 48-hour walkout over better pay and conditions.