Thousands of nurses are striking today and tomorrow in a fight, not just about pay, but about addressing devastating cuts to NHS services. 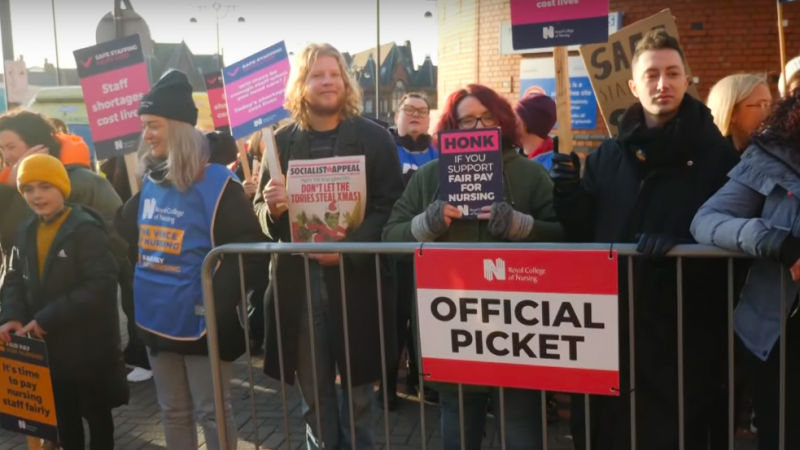 As nurses begin two-days of strike action, Pat Cullen has said the strikes are a chance for nurses to stand up and express their dissatisfaction with the state of the NHS.

Thousands of nurses are striking today and tomorrow across the country in a fight, not just about pay, but about addressing devastating cuts to NHS services.

Nurses are joining picket lines in a bid to secure fair pay, better working conditions, safe staffing levels, patient safety and to save the NHS.

Pat Cullen, General Secretary of the Royal College of Nursing, said this morning that nurses are standing up and saying that they have had enough.

Furthermore, there are 47, 000 unfilled nursing posts in England alone right now, as nurses struggle to provide a safe and effective service for their patients.

“The NHS is in a crisis and our staff are working in a crisis every single minute of the day, so to ignore that is living in a parallel universe to those staff who are working in really difficult conditions. Equally that’s just unfair and unsafe for our patients.”

Pat Cullen has urged the government this morning to once again ‘get around the negotiating table’, as the strikes ‘are in the government’s hands’.

Nurses from more than 55 NHS trusts will take part in the 48-hour industrial action, with more walkouts scheduled on 6 and 7 February if the government fails to come up with a viable offer.

Speaking to BBC Breakfast this morning, Cullen said they had, ‘extended an olive branch, in fact the whole tree’ and offered to meet the government halfway to stop further strikes.

The RCN has been calling for a pay rise at 5% about inflation, though they have said they are open to negotiation and would accept a lower offer.

Waves of solidarity with nurses have spread across the country as members of the public continue to share their support for the strikes.

On a snowy picket line outside Dorset County Hospital today is James Merrell, Senior Regional Officer for the RCN, who told LFF the support has been overwhelming.

“The response from members of the public and even patients has been completely overwhelming, we’ve had chocolates and cakes delivered to the picket line and so many horns honking. It’s been a really good turnout.”

He added: “We get a lot of calls from members who are going to food banks and struggling in the cost of living crisis.

“Nurses care for people at their most vulnerable and delivering care and compassion to people. We’ve got to make sure those nurses are in the best position possible to be able to care for those patients.”

There was also outrage at NHS bosses who have been accused this morning of a ‘shocking lack of respect’ towards Britain’s 300,000 nurses, after a hospital offered bank staff £40/hr to cover the shifts of striking staff.

Pat Cullen said it was shocking to say the least, adding: “Perhaps paying their own nursing staff this rate would have resulted in them being able to afford to live”.