In order to proceed with such draconian measures government ministers have inevitably resorted to misrepresentation and outright lies. 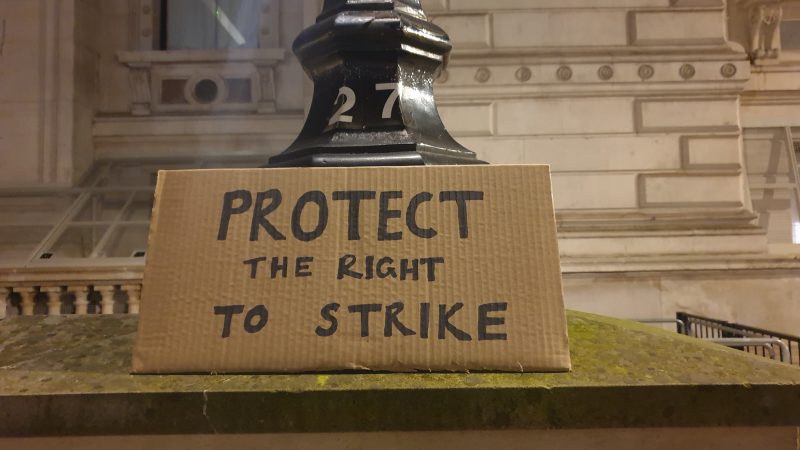 The government’s Bill on curbing trade unions reached its second reading in the House of Commons last night.

The Strikes (Minimum Service Levels) Bill is a piece of draconian legislation which is aimed at hobbling strikes in key parts of the economy, and so undermining the fundamental right to strike across the whole economy. This in turn will drastically undermine the role and appeal of trade unions as, without the right to strike they are reduced to mutual aid societies and are made effectively powerless against unreasonable or rapacious bosses. We are seeing plenty of those currently, in both the private and public sectors.

The legislation is probably illegal under international labour law and the statutes of the International Labour Organisation (ILO). It also completely undermines the fundamental human right to withdraw labour without reprisals, up to and including the sack.

In order to proceed with such draconian measures government ministers have inevitably resorted to misrepresentation and outright lies.

One claim is that this was a 2019 manifesto commitment. Well, so was providing the resources our public services need and the recruitment of additional doctors and nurses. In reality, our public services are in crisis and medical professionals are leaving in droves, forced out by under-staffing and falling real pay.

“We will require that a minimum service operates during transport strikes.”  There is nothing at all about these being imposed on NHS workers or firefighters, or other workers in future.

In addition, the sole paragraph dealing with minimum service levels goes on to say,

“Rail workers deserve a fair deal, but it is not fair to let the trade unions undermine the livelihoods of others.”

It is not true in the slightest that the government (which interferes so blatantly in the current dispute) is providing a ‘fair deal’ for rail workers. Pay freezes have been imposed even though the cumulative rise in consumer price inflation over the last two years to November has been over 16%. Official projections from the Office for Budget Responsibility (OBR) suggest that real pay will fall again in 2023 unless there is a big pay rise.

Government claims that there is no money left or that their miserly pay offers are the work of independent pay review bodies have already been widely exposed as frauds. The review bodies have their entire terms set by the government, and ministers have found hundreds of millions in funds to subsidise the rail companies for strike losses. This shows their real aim is breaking the unions.

Finally the claim that other countries have similar agreements curbing strikes needs debunking. Yes, Italy and others do have such agreements but the context is very different. Because anti-trade union laws here are already far more severe than other countries, the sanctions for breaking the agreements are very different. In Italy you can lose the equivalent of two hours’ pay. In this country, it could mean losing your jobs and your livelihood if you are blacklisted. Unions could face unlimited fines.

It is clear that this is a thoroughly reactionary piece of legislation and that the entire labour movement must oppose it completely.