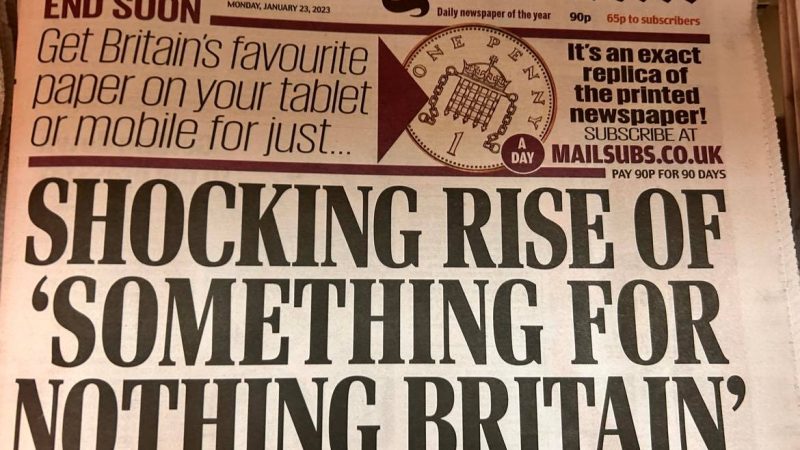 The Daily Mail’s front page was a shocker yesterday, even by its own standards.

‘Shocking rise of ‘something for nothing’ Britain’ splashed the headline. The article refers to a ‘bombshell report’ by Civitas that reveals more than half of households – 36 million people – get more from the government than they pay in tax. The definition, the Mail admits, includes the amount individuals receive from ‘benefits in kind’, such as the use of health service and state education. This is up from 24 million – or two-fifths of households – when Tony Blair was in power at the turn of the millennium, the report continues.

The nation’s ‘massive reliance’ on the State, is, says the Mail, “being borne by higher earners,” as the think-tank’s report found.

The surge in State ‘dependency’, means the poorest fifth of households receive £17,600 more on average in welfare and non-financial benefits from the State than they pay in tax. Meanwhile, the top 10 percent of earners account for 53 percent of all income tax, says the report.

It also claims renewed alarm has been sparked among senior Tories who demanded tax cuts to boost growth and a fresh debate about the role and size of the State.

Tory MP Lee Anderson – aka ’30p Lee’ because of strange comments he made about food banks – tweeted the frontpage, claiming: “We cannot have less than 50% of the population supporting the majority. It’s just not fair.”

Civitas, who carried out study, are residents of the infamous 55 Tufton Street in Westminster, home to a network of liberation lobby groups and think-tanks related to climate science denial, pro-Brexit and fossil-fuel lobby groups. The think-tank describes itself as ‘classical liberal’ and ‘non-partisan.’ It was among a small yet influential group of neo-liberal think-tanks that criticised the UK Climate Change Act for increasing energy prices.

The Mail’s front page article was ripped apart by many, and its use of a Tufton Street organisation as the source of the study was the butt of much of the contempt.

“55 Tufton Street have served up another blinder for the Daily Mail. Those poor rich people bled dry by the poorest and neediest amongst us. A truly despicable front page,” wrote one Twitter user.

Others shared their dismay at the newspaper’s assault on the poor.

“Sickening and makes me angry. Ohhh the poor poor rich people. Never mind the mum who hasn’t eaten today so her kids can or the elderly man wearing his coat in bed because he can’t afford the heating. Our country sucks,” wrote one reader.

“Honestly thought it was a reference to Johnson and his £800k loan,” another posted.

Others pointed to the lack of context in the report and the misleading headline.

“Top 10% of earners pay half of tax” shrieks the Daily Mail. But the richest 1% get TWO THIRDS of new wealth. So the top 10% still aren’t paying anything like their fair share of tax.