‘It is a bleak day for the government when even the water companies are blaming their inaction for the sewage crisis.’ 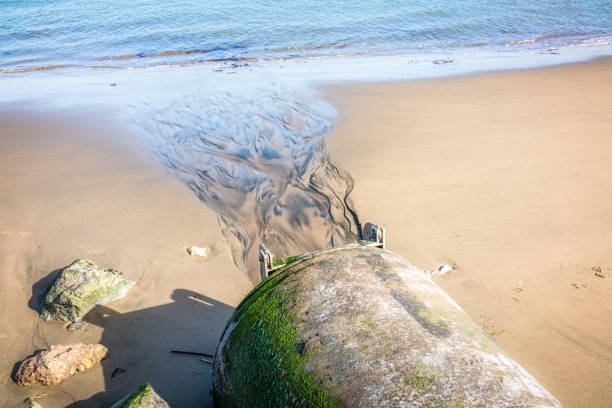 Anti-Sewage campaigners are demanding that the government takes action over claims that waste is being illegally dumped into rivers in the UK.

Data from the Environment Agency shows that over the course of 2020 and 2021, sewage had been dumped into rivers and seas around the UK more than 700,000 times, equating to almost 6m hours.

A report from Surfers Against Sewage (SAS) shows that water companies are illegally discharging sewage even during dry, hot weather. The Urban Waste Water Treatment Directive explains how sewage outflows are only permitted in ‘unusually heavy rainfall’ but the analysis by SAS suggests that water companies ignored such regulations as 146 ‘dry spells’ occurred October 2021 and September 2022.

Amy Slack, head of campaigns and policy at SAS, said it is time the government “took real action” and curbed the “destructive and selfish behaviour of the water companies responsible for this literal s**t storm.”

During his short time as environment secretary, Ranil Jayawardena demanded that the chief of water companies wrote to him to inform of plans to reduce storm overflows, where human waste is pumped onto beaches and into rivers.

When obliged to under the Freedom of Information Act, the Department for Environment, Food and Rural Affairs, failed to release the letters, until several months later. The content of the letters was damning for the government, with bosses noting a lack of government action on the sewage scandal. The companies blamed the government’s failure to introduce new laws as a reason for sewage discharges.

The Liberal Democrat environment spokesperson, Tim Farron, said: “It is a bleak day for the government when even the water companies are blaming their inaction for the sewage crisis.

“No wonder the environment department sat on these letters for so long, they are highly embarrassing. They prove successive conservative ministers have buried their heads in the sand while Britain’s coastlines have been polluted with foul sewage.

“These are the same water company executives who paid themselves insulting bonuses worth millions of pounds, all while destroying rivers and lakes. The government needs to get their act together. Years of Conservative chaos has delayed tackling this crisis. This is an environmental scandal which is sadly here to stay.”

The calls come as the latest polling shows the vast majority of the public are in favour of the nationalising of key utility companies, including water. Additionally, more than 200,000 people have signed a petition calling for water to be renationalised.

This week, the Guardian revealed that over 70 percent of the privatised water industry is owned by private equity, pension funds, foreign investment firms, and, in some cases, businesses based in tax havens.

Supporters of nationalising the water system and other utilities cite rulings from the high court, court of appeal and European court of human rights (ECHR) on shareholders’ general rights to compensation in a nationalisation.

The court of appeal ruled that parliament could renationalise the water industry without being obliged to compensate shareholders.

“The court would only interfere if it were to conclude that the state’s judgment as to what is in the public interest is manifestly without reasonable foundation,” said the court of appeal.