'A crisis is social care has been created by underfunding'. 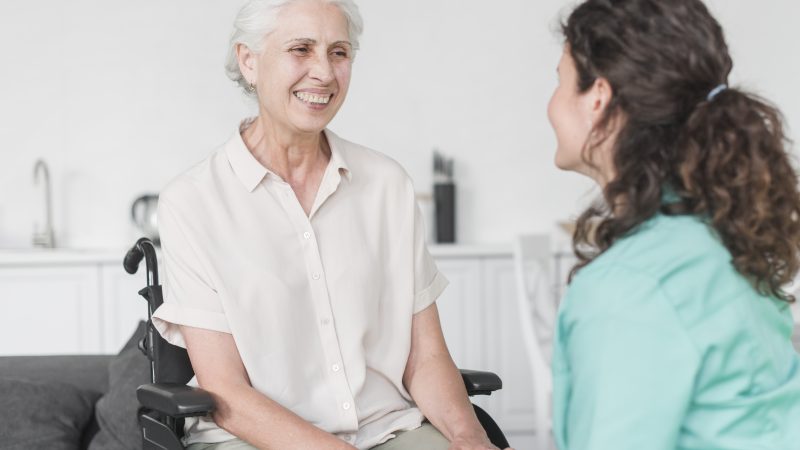 A standard formula used by the UK government for the degradation of publicly-owned healthcare services is to starve them of resources, make them dysfunctional and then offer privatisation and market-based solutions as the only viable alternatives, which inevitably deepen social exclusions. This formula has been tested on the National Health Service (NHS) and large parts have been handed over to profit-seeking corporations.

The same formula has been applied to social care in England, which is the responsibility of local authorities.  Privatisation has destroyed the social care sector and now leading Tories are pushing for the next stage – forcing people to buy insurance cover.

A crisis is social care has been created by underfunding. Local authority grants from central government have been cut by 37% in real-terms between 2009/10 and 2019/20 alone, degrading their ability to operate care homes. In 1960, the private sector provided 10.5% of residential care, while the public sector provided 66%. Now 84% of care home beds are controlled by corporations. Around 17,000 care homes have 400,000 residents.

Last year, local authorities received some 1.92 million requests, including 578,000 from working-age adults, for help. In 2020/21, local authorities spent £26bn on adult social care. Nearly 50% of the expenditure is on working-age adults. Financial help is means-tested. In England, people with assets worth more than £23,250 are normally not eligible for care home support. The government promised to cap lifetime social care charges to £86,000, and this presupposes that people have that much money spare.

The resources handed to care homes are not reaching patients because profiteering is rife. For example, Runwood Homes operates on a profit margin of 37% and Avery Healthcare on 41.7%, leaving less for frontline services. Too many care homes engage in financial engineering and avoid taxes.

The social care sector employs some 1.62 million staff.  The median wage is around £9.50 an hour and around 165,000 posts are vacant. Low wages and high staff turnover makes it difficult to provide effective personal service.

Rather than ending privatisation or curbing profiteering, former Prime Minister David Cameron is pushing for “some form of insurance to try and deal with these catastrophic costs”. As no insurance company offers cover for social care, Cameron urges the government “to form some sort of partnership with insurance or perhaps even provide the insurance itself”.

Cameron does not say what the insurance premiums would be. The fees charged by care homes are between £27,000 to £39,000 per annum for a residential care home and £35,000-£55,000 if nursing care is required. Last year, former Health Secretary (Lord) Peter Lilley  peddled a Bill which sought to recruit people with the claim that a one-off insurance premium of £16,000 would be needed. This is a gross underestimate. A hefty insurance premium would be needed, and that would be beyond the reach of millions.

Tories would expect people to sell their homes or offer a charge on it to borrow money to pay insurance premiums, but home ownership is declining. In 2003, 70.9% of the homes were owner-occupied compared to 63% in 2018. Black African (20%) and Arab (17%) ethnic groups have the lowest rates of home ownership. The decline in home ownership is more pronounced in younger age groups: In 2003/04, 59% of households led by someone aged 25-34 were homeowners.  This fell to 41% in 2019/20.

Mortgaging homes to pay for social care is not a practical proposition for most people. Around 13% of retirees continue to pay off mortgages in retirement. Many are already using equity release schemes to top-up low state pension and pay household bills. Due to escalating house prices and failing wages, many younger people are living in parental homes and no parent would want to turf their children out to pay social care insurance premiums.

Even if insurance premiums are paid, insurance companies and care homes can become bankrupt and bailouts would become necessary.

The insurance-based approach may help rich individuals but is not viable for most of the people. Universal social care, free at the point of need, funded out of general taxation is needed. Some 30%-40% of the resources can be freed by ending the private sector involvement in social care.

The remainder can be provided by ending tax perks of the rich. For example, taxing capital gains at the same rates as earned income and charging national insurance on the same can provide £25bn a year extra. By taxing dividends at the same rate as earned income another £8bn-£10bn can be raised. Currently, earnings between £12,570 and £50,270 are subjected to a 12% national insurance charge. Incomes above that attract a charge of only 2%. By extending the 12% charge to all income, an additional £15bn a year can be raised.

An insurance-based approach to social care is a test bed for the Tories. They would follow it up with the same for general healthcare and this must be opposed.