In response to the autumn statement, the People’s Assembly has organised a coordinated National Day of Action. 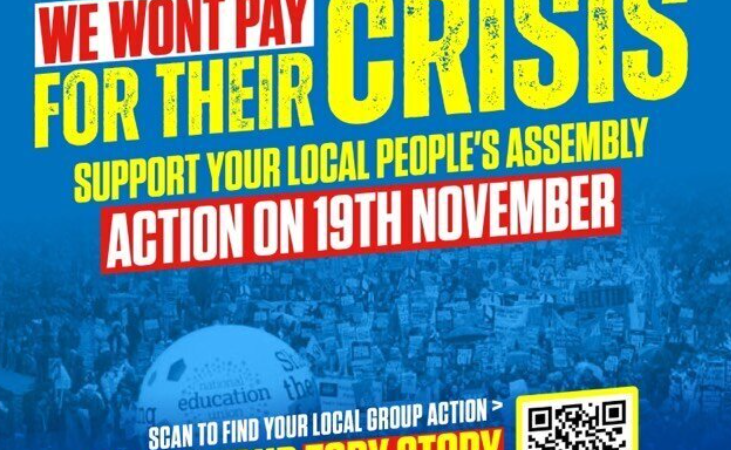 Action is taking place up and down the country today as a mark of resistance over the chancellor’s fiscal statement.

The People’s Assembly, which campaigns against government austerity and calls for greater equality, says the Tories are making ideological choices.

“They have given billions to energy companies, to replace trident, for the failed track and trace system, and much more. But so far, any kind of wealth or windfall tax has been completely off the table. We say enough is enough!” says the group.

In Manchester, people are giving speeches from a series a stalls and speaking to people passing by. In Bournemouth, a No More Austerity! Demonstration is being held with protestors calling for a general election now, for the government to tax the rich, for an of the cost of living crisis, and for no public sector cuts. In Cornwall, a demonstration is taking place outside the constituency office of Tory MP Steve Double. Similar events are taking place at Cardiff, Derby, Leicester, North Hertfordshire, Rossendale, and Southampton.

Michael Burke, a socialist economist, has written a series of articles about the cost of living crisis for the People’s Assembly. Burke says that Rishi Sunak is billed as the ‘safe pair of hands’ in the oligarch media, which operates the country.

“In reality, he is only safe because he will take account of the current resistance to further attacks on workers and the poor.

“He already has a track record of supporting big business at the expense of ordinary people. He was responsible for the disastrous ‘eat out to help out’ policy which did not save places to eat. But did help restart the spread of the virus,” writes Burke.

In a budget breakdown following the autumn statement, Burke explained how austerity doesn’t work. “Austerity, which has been in place for a dozen years now, is a bit like Thatcher’s monetarism or shadowing the deutschmark or all the other claims for government economic policy that have been true over the past period, are really about transferring incomes. Transferring incomes from workers and the poor to big businesses and the rich. The cloak for that this time was the deficit and debt,” said the economist.

Today’s nationwide protests follow a demonstration in London two weeks ago that was organised by the People’s Assembly. On Saturday November 5, huge crowds joined the People’s Assembly march calling for a general election now, along with greater support for ordinary people struggling with the cost of living crisis.