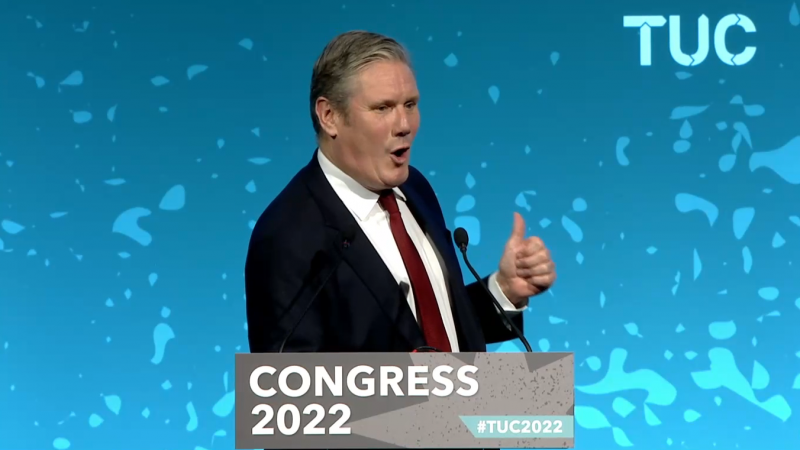 Keir Starmer this morning addressed the annual TUC Congress in Brighton. He received a standing ovation from delegates after telling the hall that a Labour government would deliver “a Britain that is fairer, greener and more dynamic”. In his speech, Starmer said, “My government will be dedicated to building an economy that works for people”.

Starmer’s speech came as the Labour Party looks increasingly likely to form the next government, with opinion polls giving them leads of over 30 percentage points, and the government lurching from one crisis to another. In light of this, he told delegates, Britain cannot afford the chaos of the Conservatives anymore. We need a general election now!”

Telling delegates that Labour would “strengthen the role of trade unions in our society”, Starmer received rapturous applause when he committed the next Labour government to repealing anti-trade union laws. He said, “Let me stand here and spell this out. If they bring forward further restrictions on workers’ rights or the right to strike, we will oppose and we will repeal”, adding, “we will tear up anti-trade union legislation such as the Trade Union Act 2016”.

He concluded his speech by saying that the next Labour government would deliver, “fair pay, good work and prosperity for all, a country where aspiration is rewarded, a clean energy superpower, a fairer cleaner more dynamic Britain where working people get their rights, respect and security they deserve”.