"Just LOOK how they changed their front page between edition" 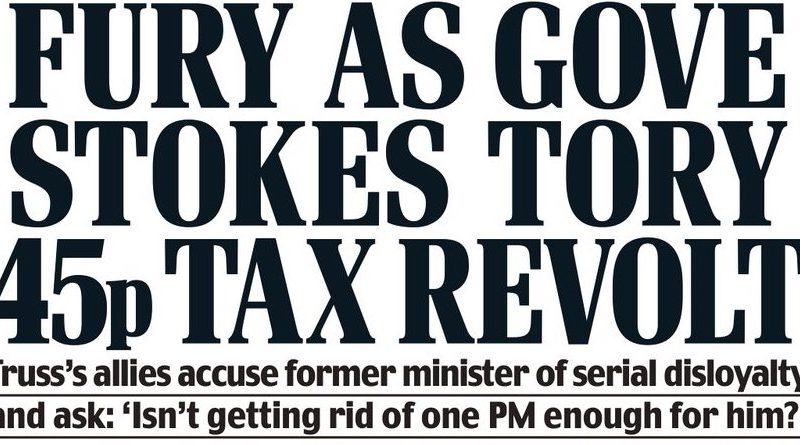 The Daily Mail is being mocked today after the paper was forced to change its front page late last night, after the government carried out a humiliating U-turn, scrapping its plan to cut the 45p top rate of tax.

Despite Liz Truss and Kwasi Kwarteng initially refusing to reverse the policy which, along with other measures in the mini-budget had led to turmoil on the financial markets, the Tory party’s conference in Birmingham today is in disarray following the screeching U-turn. Tory MPs had openly broken ranks to oppose the policy, with reports that multiple Tory MPs were in talks with the Labour Party to vote the measure down.

Last night, the Daily Mail had taken aim at Michael Gove, hitting out at him for “stoking anger” towards Liz Truss and Kwasi Kwarteng over their plans to cut the top rate of tax to 40 per cent.

He had said that cutting the top rate of income tax in the mini-budget was a “mistake” and people who have the least should “benefit first” with any cuts to tax.

Gove faced a backlash in the Mail, which ran the headline: “Fury as Gove stokes Tory 45p tax revolt’ and which quoted a senior Tory to ask: “Isn’t getting rid of one prime minister enough for him?”.

However, the paper quickly changed its front story after reports of the imminent U-turn. The new headline read: “Are Tories on brink of 45p tax U-turn.”

David Yelland tweeted: “The Daily Mail blinked, Truss is toast, just LOOK how they changed their front page between editions….. wow, wow, wow……this was between 11pm and midnight….”