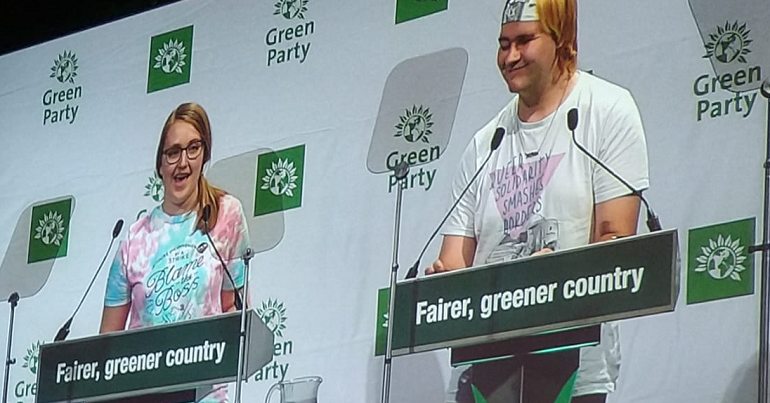 Young people under the age of the 30 are a ‘generation of insecurity’, members of the Green Party of England and Wales were told at their biannual conference. These comments were made in a speech by Kelsey Trevett and Jane Baston, co-chairs of the Young Greens – the party’s official youth and student wing.

Speaking to the conference, Trevett said, “Our generation is a generation of insecurity. Insecure work, insecure housing, insecure incomes and insecure futures”. Trevett slammed the “casualisation” of employment, and blamed the country’s housing crisis on a broken private rented sector and “Thatcherite right to buy schemes”.

Trevett dedicated a large portion of their speech to the cost of living crisis and its impact on students. Arguing that it is truly a “cost of capitalism crisis”, they went on to highlight the current situation facing students. They said, “At the end of the last academic year, 11 per cent of students turned to food banks to feed themselves. A third having less than £50 per month to live off of, no doubt in part because over a third of student housing is priced above the average maintenance loan — a loan which, amidst rocketing inflation never seen before in my lifetime, has been boosted by a pathetic 2.3%. For millions of students, this is unaffordable.”

Elsewhere in their speech, Baston explained the Greens’ proposed solutions to these challenges. She said the Greens wanted to deliver a “radical transformation of society”, through a “Green New Deal”. She said,

“A Green New Deal is the only way to transform our country into one fit for the future, ready to protect our planet. Net-zero by 2030 isn’t negotiable. In practical terms, this means massive investment in fundamental infrastructure: in our railways – publicly-owned, of course –, with new high speed connections that can break our dependence on cars. It means the introduction of safe cycle routes on a scale unlike we’ve ever seen before. It means free bus travel, on buses which are frequent, accessible, and reliable. A Green New Deal means the creation of millions of Green jobs, as we ramp up insulation, shift to renewable energy, and bring industries back into the public sector, where they belong. Anything less than a radical – truly, undeniably radical – Green New Deal is just not good enough. And we won’t settle for it.”

The Green Party’s conference runs until Sunday. Party activists will be debating a range of policies – including their position on a £15 an hour minimum wage, strike laws and the restitution of cultural objects. Members will also be debating whether to affiliate to the Enough is Enough campaign.