‘You don't get more of a Farage patriotic take than launching a £40 bottle during a cost-of-living crisis.' 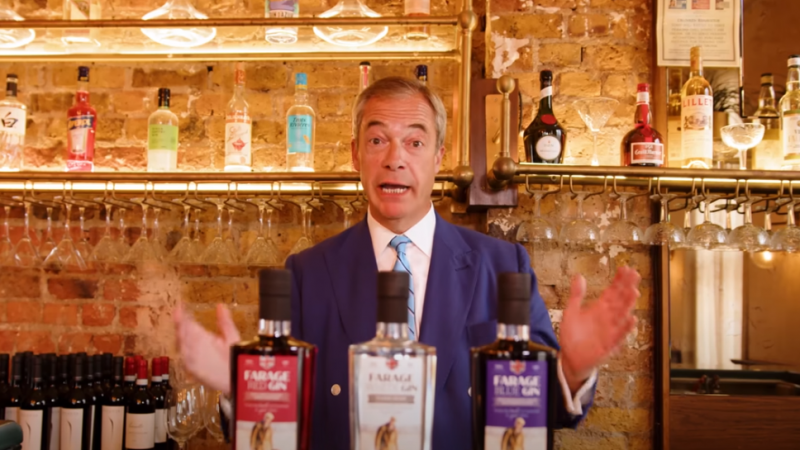 The former UKIP leader has launched his own ‘patriotic’ gin range, which he claims has ‘the taste of Brexit’. The new gin is available in red, white, and blue, and is apparently produced in a distillery in Cornwall.

In a promotional video of his new gin posted on Twitter, Farage speaks of how the ‘patriotic’ gin was made by a couple in a garden in Cornwall using spring water and no added sugar. The former politician turned broadcaster proceeds to show viewers different recipes using the red, white and blue gin.

“My brand new Farage gin is produced by an artisan distillery in the heart of Cornwall.

“Red, White or Blue – I hope you enjoy my patriotic take on this quintessentially British drink!” Farage tweeted.

At the launch of his new brand, Farage said he would send a gift-wrapped bottle to Jean-Claude Juncker, former president of the European Commission, and long-time adversary of Farage’s.

“Jean-Claude Juncker was a pleasant human being, despite the fact he didn’t agree with my position.

“He deserves a bottle and one will be on its way to Luxembourg. I can’t quite say the same about [European Parliament Brexit negotiator] Guy Verhofstadt, so he won’t be getting one. And Donald Trump is teetotal,” he said.

The bottles cost £40 a pop and come with an alcoholic strength of 42%.

The gin range is Farage’s latest enterprise since he quit politics in 2021 and resigned as leader of the Reform Party – formerly Brexit Party – after achieving what he claims to be his life goal of seeing the UK leave the EU.

Farage’s forage into Brexit-themed gin-making has been mocked in abundance online.

Some observers pointed to the £40 price-tag amid a cost-of-living crisis. Others alluded to the back of the label, which puts the corporation’s name as Baxter Laois Limited. A scan of Open Gov UK shows that Baxter Laois Limited is registered with Companies House and is owned by Laure Ferrari. In 2017, rumours emerged that Farage was dating Ferrari, who has long been a close associate of the former UKIP leader.

Ferrari was head of the Eurosceptic think-tank, the Institute of Direct Democracy in Europe (IDDE). In 2017, the group was accused of illegally diverting money to UKIP, which came under investigation for apparently receiving £400,000 in donations from the think-tank and a political alliance ahead of the EU referendum and the General Election.

Picking out the hypocrisy of the ‘patriotic’ claims, one eagle-eyed Twitter user wrote: “You don’t get more of a Farage patriotic take than launching a £40 bottle during a cost-of-living crisis, and having it registered to your far right French immigrant girlfriend, eh Nige.”

Others noted how gin originated in Europe and is a long way off being a quintessentially British drink as Farage claims.

As gin distillers Sipsmith Gin inform, like many of Britain’s national favourites, gin did not originate on our shores. “In fact, if you don’t count the Italian monks who are thought to have used juniper berries as flavourings in distilled spirits back in the 11th century, it’s Holland that’s credited as the birthplace of gin.”

The ‘inventor’ of gin is widely believed to be a Dutch physician called Franciscus Sylvius, who prescribed a juniper-blended distilled spirit for medical purposes in 1550. And the English didn’t get their hands on the drink until fighting Spain in Holland during the Thirty Years’ War, when they drank it to calm their nerves, hence the phrase ‘Dutch Courage.’

“I am so sorry to have to break it to Mr Farage, but gin is a European migrant… The drink is quintessentially European….”