Opposition towards the 'ruthless' practice of deliberately firing people to rehire them on worse contracts is gathering momentum. 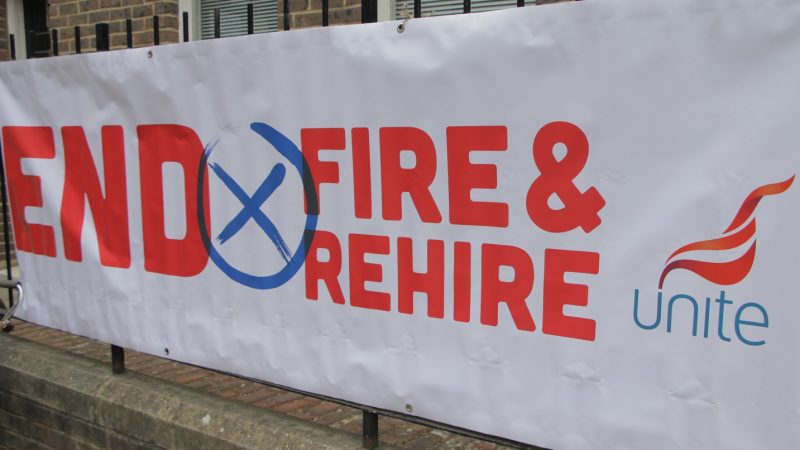 Fresh calls are being made for the government to put an end to brutal fire and rehire tactics, which can leave workers on lower pay and working longer hours.

Since the pandemic, the practice has become increasingly popular among employers, which say they are restructuring and streamlining.

Despite government promises to stamp out the tactic, fire and rehire continues to be a huge problem.

In March, widespread outrage was sparked after P&O Ferries abruptly fired hundreds of its crew and replaced them with cheaper agency staff.

Following the mass sacking of around 800 P&O workers, Boris Johnson’s government promised to clamp down on ‘fire and rehire’ practices.

Sadly, instead of clamping down, many companies continue to use the ‘ruthless’ strategy, and despite being illegal in Ireland, Spain and France, fire and rehire remains a widely accepted employment practice in the UK.

In late March, Royal Mail was warned it could be hit by strikes over plans to cut managers’ jobs.

Unite said the employer was aiming to sack nearly 1,000 managers and bring in lower rates of pay in another case of ‘fire and rehire.’ Royal Mail denies the claims.

Tesco won a legal battle over its use of fire and rehire practices. Following a case brought forward on behalf of 42 warehouse workers, who claimed Tesco was attempting to fire and rehire them on worse contracts, the supermarket giant had been prevented from using the tactic.

However, on July 15, judges overturned the initial ruling that blocked Tesco from dismissing the workers.

Warnings have been made that the ruling could pave the way for other companies looking to employ the method to cut costs.

Workers at Baker Hughes, one of the world’s largest oil field services companies, have voted to pursue strike action over alleged fire and rehire tactics at sites across Angus.

Unite the Union says that in June, workers at Baker Hughes in Montrose were given “five minutes notice” before being presented with redundancy papers and informed they had until early August to sign new contracts at reduced pay.

Unite accused the company of “laying waste to Scottish jobs” through “fire and rehire tactics”, which the union says could slash the annual wage of employees by up to 29%.

Opposition towards the corporate practice of deliberately firing people to rehire them on worse contracts is gathering momentum.

A petition urging the UK government to introduce a law that protects workers from companies attempting to tear up contracts and rehire them on worse pay, with worse terms and conditions, has been launched and has already attracted nearly 228,000 signatures.

The petition has been launched by Organise, an online community for workers to anonymously discuss workplace issues and campaign for better rights and conditions at work. The platform aims to facilitate workers across the world to start their own petitions and open letters about improving pay and conditions at work, as well as to discuss workplace-related issues anonymously and safely with other people in their workplace and/or sector.

In a bid to business secretary Kwasi Kwarteng to end the practice, the petition states:

“Companies are deliberately firing people to rehire them on worse contracts. For some reason it’s legal in this country, but it’s leaving thousands of us in the lurch. Companies shouldn’t be able to force staff into choosing between worse contracts and being fired. It’s illegal in Spain and Ireland. It should be illegal here too.”

Pointing to how, in the wake of the ruthless P&O Ferries’ sackings without notice earlier this year, Boris Johnson promised to clampdown on fire and rehire, Organise says:

“It’s clear these warm words aren’t enough – only a total ban and proper penalties will stop this cruel practice.”