'Before the House rose for the Summer, there were debates on Roe Vs Wade, woeful rape prosecution rates, Danny Kruger MP saying women should not have the “absolute right” over their bodies and Dominic Raab’s threat to unravel women’s rights; not to mention that wink at the despatch box.' 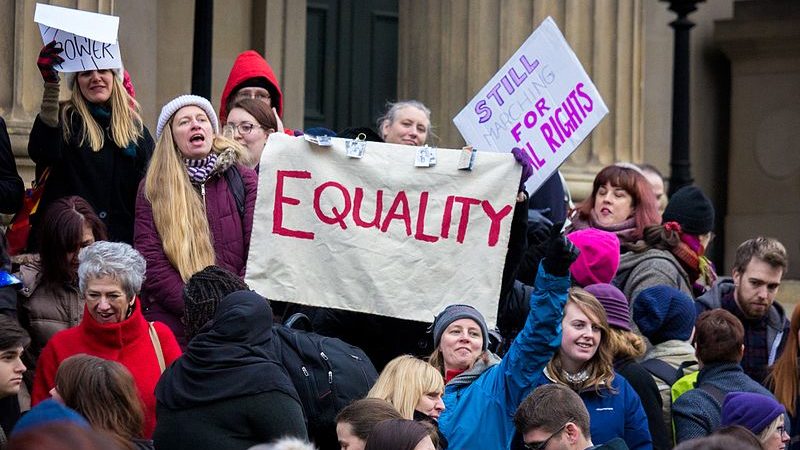 Sarah Owen is an ardent campaigner with strong trade union roots who became Labour MP for Luton North in 2019. She is currently a whip and Shadow Minister in the Shadow Levelling Up, Housing and Communties team.

It was a bruising last few weeks in Parliament.  You’d be forgiven for thinking I’m talking about the bruising few weeks for Boris Johnson, the leadership contenders, and a warring Conservative Party – but it has been a tough time for women in politics.

Before the House rose for the Summer, there were debates on Roe Vs Wade, woeful rape prosecution rates, Danny Kruger MP saying women should not have the “absolute right” over their bodies and Dominic Raab’s threat to unravel women’s rights; not to mention that wink at the despatch box. All that happened in just one day in Westminster.

So, when one of my colleagues recently asked me why I was so angry, the women around the table all exchanged looks. It was because we know that progress is not inevitable.  Women appear to be next on the list of this Government’s so called ‘war on woke.’ This would seem an odd approach, given the Conservative’s plummeting support among women voters in the most recent by-election in Wakefield. If it is not strategically advantageous for the Tories to have a war on women now, why are they doing it? Perhaps they think stoking more anti-woke division has got them this far… why not carry on? Or, is it more likely that they have created a monster they can no longer control?

The same day as Raab’s wink and Kruger’s comments, there was an Opposition Day debate on community punishment for criminals.  This is where everyone’s favourite rent-a-gob Tory MP Lee Anderson (Ashfield) told me I was “encouraging men” to commit rape – for highlighting the fact that only 1.6% of reported rapes are prosecuted.

This was outrageous from Anderson, but we have become used to him saying something shocking or divisive in a desperate attempt to make himself relevant. What was more concerning was that this line of attack also came from the Justice Minister himself at the despatch box.  The warped attempts to silence women in opposition appears to be the official Conservative Party line – a cynical attempt to stop MPs and campaigners from holding the Government to account for their failure to prosecute rapists.  The then-Justice Minister Victoria Atkins even wrote to the Speaker to complain about the language used by Labour frontbencher Ellie Reeves, despite her remarks reflecting the grim statistical reality for thousands of victims of rape who never see justice. When she said that the Government had “effectively decriminalised rape”, she was drawing on the language used by Rape Crisis and the victims’ commissioner for England and Wales, Dame Vera Baird QC.

It appears that the Tories are very defensive about their appalling record on crime and are willing to go to desperate lengths to hide any criticism of their failure. When we dig a little further into the level of their failure on crime and protecting victims, it is obvious why they are sensitive. In the last few days of Parliament, the Office of National Statistics revealed that police forces across England and Wales have recorded the highest number of crimes in 20 years – with sharp increases in fraud, rape and violence. A total of 6.3 million crimes were recorded in the year leading up to March 2022, which is 4% increase on the previous highest ever recorded figure (from 2019/2020). This Conservative Government has failed in its most very basic of duties; to protect the public from harm and to grant victims justice.

If a crime goes unpunished, it has the impact of decriminalisation and legalisation. Our job in Opposition is to represent, to hold this Government to account and to give a voice to the voiceless – so the Labour benches will not be making any apologies or retracting the damning statistics or language we use to stand up for victims.  If the Conservatives are angrier about the language used in Parliament than the fact in 2020, out of 52,210 rapes documented by police in England and Wales, only 843 individuals were given a charge or summons, then they have no serious interest in getting justice for victims.

Hundreds of people contacted me following that disgraceful exchange between Lee Anderson, the then Minister James Cartlidge and myself, to say that the statistics sadly reflect their experience.

We can and must do better.

Labour knows that our communities need and deserve better than this. We will create neighbourhood prevention teams that will give our communities the tools and support to tackle the root causes of antisocial behaviour. We will put communities and victims at the heart of how offenders repay society and make sure justice is seen to be delivered locally and for good. Labour will put security at the heart of its contract with the British people and support victims of crime.

It’s why I joined more than 100 women Labour MPs calling on Boris Johnson to scrap plans to allow a defendant’s legal team to use rape victims’ therapy notes in court proceedings if they thought it was “relevant”, rather than only in cases where it would undermine a case. Access to therapy for victims is vital not just to address trauma of assault or rape, but also throughout the lengthy criminal justice process.

This is why on a recent trip to Liverpool, Keir Starmer committed to fast-tracking rape and domestic violence through the courts under a Labour government, so that no victim has to wait more than a year for justice. This will make a world of difference to the people currently waiting for far too long – if ever – to see justice; because justice delayed is justice denied.