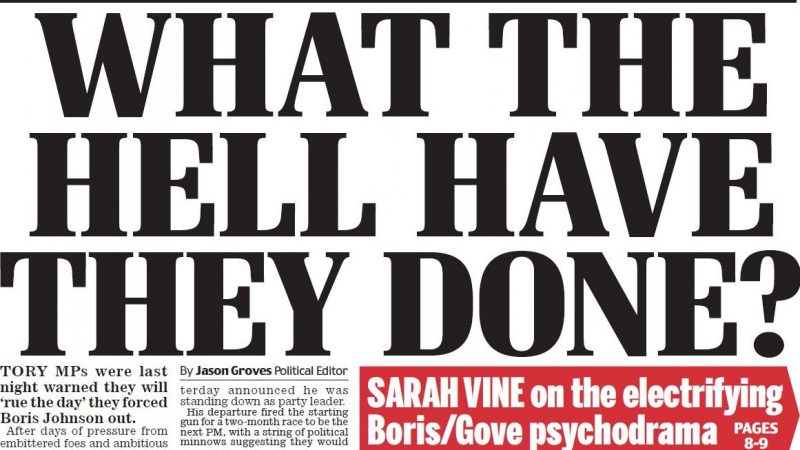 The Daily Mail and Daily Express are among those having a complete meltdown following Boris Johnson’s announcement that he would be resigning as prime minister, with the front pages of both newspapers brutally mocked.

The Mail ran with the headline: “WHAT THE HELL HAVE THEY DONE?”, in disbelief that anyone could even contemplate booting out a prime minister known to be a habitual liar, bigot and law breaker.

One social media user wrote: “Paul Dacre justifying his knighthood I see”, while others were left in complete shock. One Twitter user wrote: “Find it astonishing how badly the Mail are misreading the public mood on this.”

The Daily Express meanwhile ran an equally deluded headline, with the words: “Thank You Boris.. You gave Britain Back It’s Freedom”.

Commenting on the headline online, one person wrote: “That front page is truly shocking even for the Daily Express. This is a lawless immoral corrupt lying charlatan PM forced out of office by his own party.”

Meanwhile, the Sun printed the headline: “Kiss Goodbye…and thanks for Brexit Boris”. What benefits are we exactly celebrating?

It’s surprising that some still consider these arms of government propaganda as newspapers. The central purpose of a newspaper is to hold power to account, a role that some of our most influential newspapers had abandoned long ago.