Under the new legislation roadblocks can carry a six-month prison sentence. 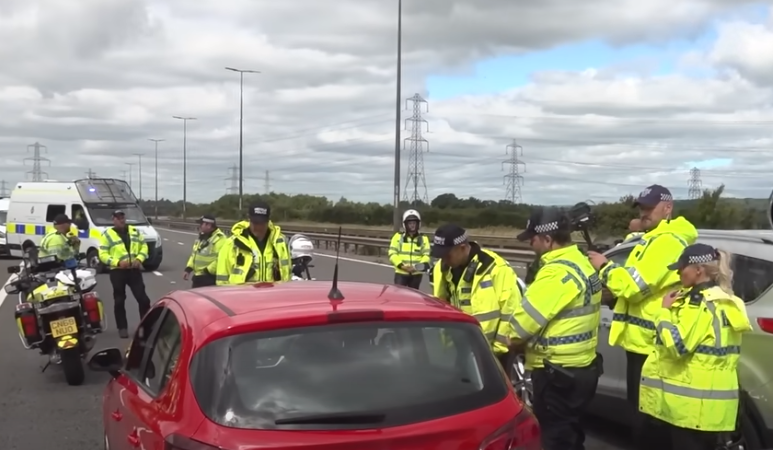 The home secretary is reported to have pressed officers to use new powers against the ‘go-slow’ protestors.

July 4 saw at least 13 protestors arrested for staging protests on Britain’s road network. Known as the ‘go-slow’ protests, the fuel price campaigners held up the M54, M62, A38, M4, along with several other roads. Vehicles crawled to around 30mph along two lanes, leaving the outside lane free. Most of the arrests took place on the M4.

The demonstrations were organised by Fuel Price Stand Against Tax, a recently formed group that campaigns against record level fuel costs.

Since the start of 2022, fuel prices have risen from 145p to 191.5p a litre. Around 45% of the cost is now made up of VAT and fuel duty. The campaigners warn that protests will continue unless the government does more to address fuel prices.

Senior government sources quotes in The Times and the Daily Mail said the Priti Patel expects forces to use new powers to prevent fuel campaigners.

The controversial policing bill, which came into force on June 28, gives police greater powers of dispersal, while increasing penalties for protestors. Under the new legislation, ‘wilful obstruction of the highway’ now carries a six-month prison sentence and/or an unlimited fine, steeply contrasting to the maximum fine of £50 the offence previously carried.

The laws were introduced in response to Insulate Britain and Extinction Rebellion environmental protests which blocked roads en masse.

‘Through our Police, Crime, Sentencing and Courts Act, we have given the police a wealth of powers to deal with disruptive and damaging protests, including imprisonment and unlimited fines for those blocking a highway – actions which inflict further pain on those affected by rising prices.

“The home secretary would encourage and support the police to make use of all the powers available to them. Forces need to move people on. These protests are blocking people from getting to work and from carrying out other vital journeys – this is not about whether you believe in the cause or not.”

Following the arrests of the protestors on the M4, a petition to slash fuel duty reached 300,000 signatures.

In a separate incident, two climate change protestors were arrested in London after gluing themselves to the frame of John Constable’s masterpiece The Hay Wain at the National Gallery.

An additional incident on July 3, saw a group of protestors from Just Stop Oil stormed the track at the British Grand Prix. Seven people were arrested following the track invasion. The protest gained the respect of six-time Formula 1 world champion Lewis Hamilton, who said “big up those guys.” Fellow Formula 1 driver Sebastian Vettel, shared similar admiration, saying: “I very much sympathise with their fears and their anxieties.”

Monday’s arrests involving new powers of the Police, Crime, Sentencing and Court Act, follows an altercation outside Parliament on June 28, which saw the controversial bill being used to break up a peaceful protest and confiscate the equipment of anti-Brexit activist Steve Bray.