As police flex their new powers by targeting a peaceful protest outside parliament, resentment towards the government's controversial legislation seems higher than ever. 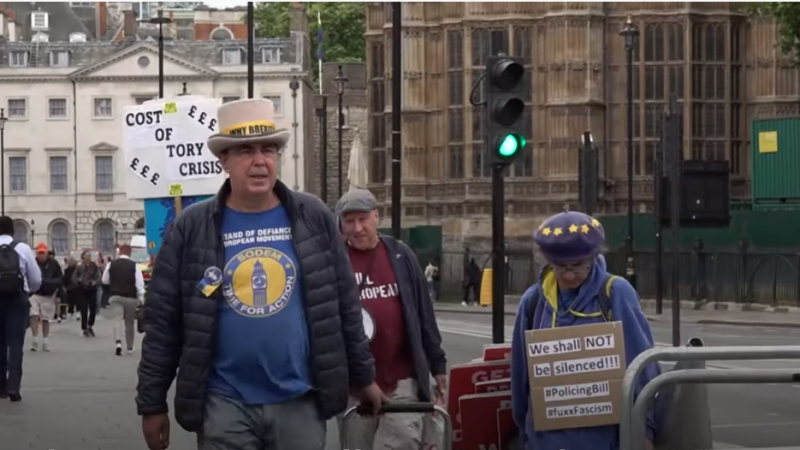 On June 28 – the day the government’s reforms in the Police, Crime, Sentencing and Courts Act came into force – police used the new powers to stop a peaceful demonstration taking place in Parliament Square.

Police, acting under the new legislation, swooped on Steve Bray, commonly known as ‘Stop Brexit Man’, and seized his speakers. ‘Noisy protesting’ is now forbidden in the area Bray was protesting, under the new Police, Crime, Sentencing and Courts Act.

One of the most controversial parts the police and crime bill is the impact it will have on the right to protest. Marches and demonstrations that are deemed ‘too noisy’ or disruptive can now been banned by the authorities. The new law also empowers police to have more control over static protests, including where and when demonstrations take place, to set noise limits, impose a start and finish time, and use the rules to demonstrations by just one person.

No sooner had Bray posted a video of the altercation on Twitter, support for the well-known activist and the rights to peaceful protest swamped social platforms.

Such was the flood of support for Steve Bray and contempt towards the government’s new policing powers in the aftermath of the incident in Parliament Square that the hashtags #StandWithSteveBray, #FreedomToProtest and #SteveBrayForPM quickly gathered momentum.

Even Leave voters shared their support to the activist, as one voter wrote:

“Being a Leaver, I used to hate seeing you on the news in the background every day. Now I see the good you’re doing, and I regret the way [I] voted.”

Speaking on the BBC’s Victoria Derbyshire after the incident, Bray said the UK is “heading down the path of fascism.” Saying he has been “summonsed” with the case going to court, the anti-Conservative campaigner said he “may need some legal help.”

A Crowdfunder listed on Bray’s Twitter profile saw a surge of support in the wake of the police confiscating the activist’s equipment. The ‘It’s your fight to save the UK from the liars, cheats and charlatans,’ Crowdfunder was launched in July 2020 and has currently raised over £221,000.

Bray told Christopher Hope, associate editor of the Telegraph, that he had raised “£80,000 overnight” in online pledges after the police took away his speakers from outside Parliament on June 28.

Donators did not hold back in sharing their reasons for making a donation to the campaign, with one writing: “The amount now raised (over £200,000) indicates that we do NOT like Soviet style policing, nor political shenanigans aimed as persecuting us. #SteveBray”

Since proposals for the government’s Police, Crime, Sentencing and Courts Bill were first announced, widespread protests have taken place in cities across the UK, with thousands of activists, armed with the Kill the Bill slogan, taking to the streets and defending their right to protest.

Fresh rounds of Kill the Bill protests took place up and down the country as the controversial anti-protest measures reached different stages of their parliamentary journey.

Despite widespread resentment and protest, the Police, Crime, Sentencing and Courts Bill completed its passage through parliament, receiving Royal Assent and becoming an Act of Parliament on April 28, 2022. On June 28 it was enforced into British law.

Now, as the bill that was described by former home secretary David Blunkett as risking making the UK “more like Putin’s Russia” has been enforced, and police flex their new powers by targeting a peaceful protest outside parliament, resentment towards it seems higher than ever – as testified by the storm of support towards Steve Bray this week.