‘It’s sort of telling the truth and crossing your fingers at the same time,’ said Simon McDonald. 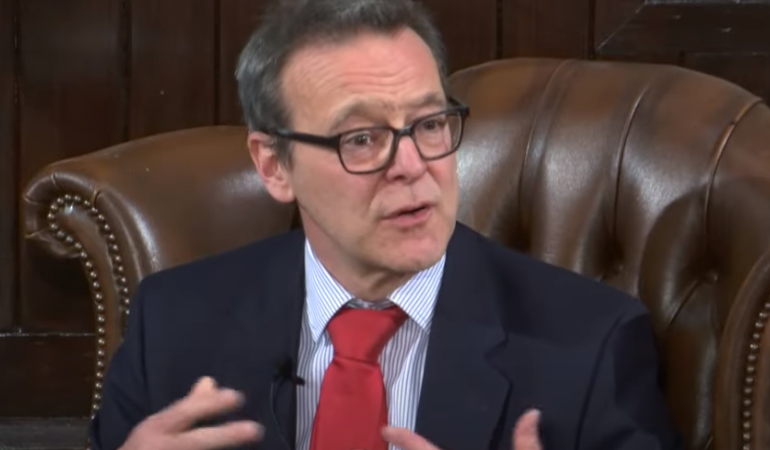 Simon McDonald, the former permanent secretary at the foreign office, has said Boris Johnson was ‘briefed in person’ on the alleged wrongdoings by Chris Pincher.

In a strongly-worded letter to the parliamentary standards, McDonald has accused the PM of lying about whether he knew about earlier complaints of sexual misconduct made against Pincher, who resigned over his behaviour last week.

McDonald said: “I have written to the Parliamentary Commissioner for Standards – because No 10 keep changing their story and are still not telling the truth.

“They need to come clean. The language is ambiguous. It’s sort of telling the truth and crossing your fingers at the same time.”

The intervention into the scandal was made after ministers admitted Pincher was investigated in late 2019 over allegations of ‘inappropriate’ behaviour.

On June 30, Pincher resigned over claims he groped two men, saying it was ‘the right thing to do in the circumstances’ and apologising to everyone concerned after ‘embarrassing himself.’

According to McDonald, Pincher “deceived me and others in 2019”, and “cannot be allowed to use the confidentiality of the process three years ago to pursue his predatory behaviour in other contexts.”

Boris Johnson made Pincher deputy chief whip in a cabinet reshuffle in February. On July 1, No 10 claimed the PM was not aware of any “specific allegations” when he made the appointment. The claim has been repeated by a number of Tory ministers intent on defending Johnson.

No 10 changes its story

However, on July 4, No 10 changed its story, saying: “The prime minister was aware of media reports that others had seen over the years, and some allegations that were either resolved or did not progress to a formal complaint.

“In the absence of a formal complaint it was not appropriate to stop an appointment on the basis of unsubstantiated allegations.”

Now, in a blistering letter to the standards watchdog, Simon McDonald, who was the permanent under secretary and head of the Diplomatic Service at the Foreign and Commonwealth Office from August 2015 to August 2020, has said a formal complaint had been made.

“The original No10 line is not true and the modification is still not accurate. Mr Johnson was briefed in person about the initiation and outcome of the investigation.

“There was a “formal complaint”. Allegations were “resolved” only in the sense that the investigation was completed; Mr Pincher was not exonerated.

“To characterise the allegations as “unsubstantiated” is therefore wrong.

“I am aware that is unusual to write to you and simultaneously publicise the letter.

“I am conscious of the duty owed to the target of an investigation but I act out of my duty towards the victims.

“He cannot be allowed to use the confidentiality of the process three years ago to pursue his predatory behaviour in other contexts.”

Talking on BBC’s Today programme, Simon McDonald defended his decision to write a letter to the standards commission, saying: “Things get to a point where you have to do the right thing.”

Today, deputy prime minister Dominic Raab, confirmed that Pincher was investigated over alleged “inappropriate” behaviour nearly three years ago. According to Raab, Pincher’s alleged actions in October 2019 did not result in disciplinary action and the case was closed.

However, McDonald insists “an investigator upheld the complaint.”

The fresh allegations raise concerns about what the prime minister knew prior to appointing Pincher has deputy chief whip and has sparked outrage from the opposition.

Deputy Labour leader Angela Rayner said: “Boris Johnson’s desperate attempts to cover up what he knew about sexual assault complaints against Chris Pincher before appointing him have been blown out the water.

“It is now clear that the prime minister knew about the seriousness of these complaints but decided to promote this man to a senior position in government anyway.

“Boris Johnson is dragging British democracy through the muck. His appalling judgement has made Westminster a less safe place to work.”

Toby Perkins, Labour MP for Chesterfield and Staveley, described the government as ‘feral.’

“This government is literally feral. It flips from maliciously dishonest to haplessly incompetent and back again with dizzying regularity,” he said.