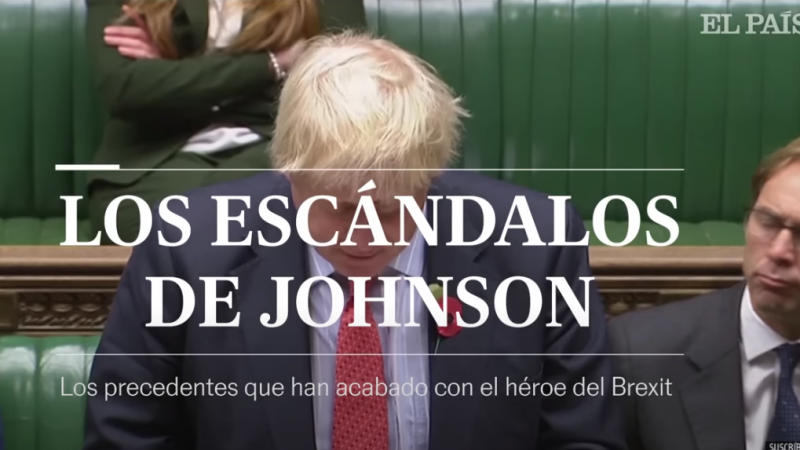 With his lies and law breaking, Boris Johnson is said to have made Britain a global laughing stock. And with a proposed bill that would override aspects of the post-Brexit trade agreement, the European media’s reaction to Johnson’s demise – unlike the UK’s right-wing press – was not without scorn.

‘The end of the Brexit wizard’s getaway’

The Spanish media dedicated the front pages of websites to the resignation on the morning of July 7. El Pais, the most read newspaper in Spain, ran with the headline ‘Boris Johnson: The end of the Brexit wizard’s getaway.’ The article notes how the Johnson premiership lacked logical decision making. Interesting, it also focused on how the scandals that engulfed Johnson would have brought another prime minister down much earlier, yet he managed to somehow remain in office.

El Pais also gave a damning appraisal of the motivations of the Attorney General Suella Braverman, saying: “The woman who prepared for Johnson the convoluted legal reports that justified the unilateral rupture of the Northern Ireland Protocol that pitted London against Brussels; the faithful ally of the prime minister who did not hesitate to praise him at the slightest occasion, announced her [prime ministerial] aspirations on the ITV network.”

El Mundo, Spain’s oldest newspaper, was also critical, referring to him as an ‘unscrupulous leader’ and writing: ‘Boris Johnson a pain for Queen Elizabeth.’

But perhaps the most critical of the Spanish press was Publico, which said: ‘From Brexit to Downing Street parties: the sad legacy of a ‘hooligan’ named Boris Johnson.’

The ‘clownish mask that he chooses to wear’

In Italy, one of the country’s oldest newspapers, Corriere della Sera, made reference to Johnson’s childlike antics, saying ‘the child who wanted to be ‘King of the World’ was brought down ‘by the clownish mask that he chooses to wear.’

The French national newspaper Le Monde broke live updates on the situation unfolding at Westminster. The media outlet focused heavily on the resignation of the UK Northern Ireland Secretary Brandon Lewis and the current turmoil regarding the NI protocol.

“Mr. Lewis leaves the post he has held since early 2020 at a tricky time, with London seeking to change the terms of the deal it signed with Brussels to govern post-Brexit trade in Northern Ireland.”

France’s left-wing daily Liberation wrote an explanatory piece on why Johnson was quitting as PM. It didn’t really need to go beyond its introduction, which read: “Fifty resignations in his government and a chain of scandals led Boris Johnson to the door of Downing Street.”

Germany’s biggest tabloid Bild ran with a ‘Borexit’ headline. The headline of another article in Bild dedicated to the turmoil in Westminster simply read ‘Bye bye Boris!’

In a damning evaluation of the situation, Der Spiegel, the largest German news website, wrote: “[Johnson] obviously failed to see the calamity that had been building for the past few days. But why would he have done? Compared to the populistic and perfidious rack and ruin of the past three Johnson years, the latest scandal … was almost pardonable. Nothing more than a pale comet’s tail in the cosmos of lies of Boris Johnson”.

But it was the Irish Examiner which was perhaps the most unforgiving, with the headline: “Eton’s greatest mess, Boris Johnson has finally come unstuck,” followed by: “Boris Johnson’s resignation proves that greased piglets can fly right-out of Westminster.”