'When pressed, it is perhaps not surprising that ministers fail to specify any rights or even any specific rulings they find objectionable.' 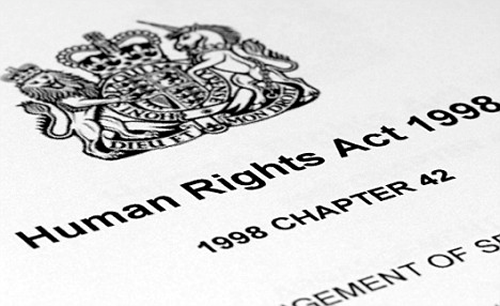 The government’s threat to scrap the Human Rights Act would be a grave set-back for all our civil liberties and hard-won freedoms. It might take a generation or more to reverse, and clearly needs both more concerted and robust opposition than to date.

A senior official of the Council of Europe (nothing to do with the EU) has said that the move would be a serious blow to human rights both in this country and internationally. She is correct, in both judgements.

The move would fit in with the government’s entire programme and policy, which is to ride roughshod over human rights. This government has already produced a slew of legislation in this area, from the spycops Bill, to the Overseas Operations Bill, to the proposed Policing Bill as well as others. Each of them represents a move to increase the powers of the state, reduce its accountability and reduce the rights of citizens. Taken together, they amount to a hard-right turn of an increasingly authoritarian government that is intent on fundamentally reducing human rights in this country.

Because there is so much misinformation about the Human Rights Act, it is worth setting out the factual position. The Human Rights Act (HRA) is directly incorporated into domestic law rights set out in the European convention on human rights (ECHR), which was ratified by all members of the Council of Europe, including this country.

The Convention was established at the end of World War II, with Britain as a prime instigator. The aim was to enshrine human rights and civil liberties across an entire continent. It was part of the widespread determination after the horrors of the war and crimes of the Holocaust, that we should all ensure ‘never again’.

Similarly, the ECHR codifies some of the most fundamental rights imaginable. These include freedom from torture, prevention of racism, prevention of child sexual exploitation and people trafficking and many more besides.

It is little wonder, then, that only right-wing and authoritarian governments have fallen foul of the Convention, or clashed over its interpretation. This government is now one of them.

When pressed, it is perhaps not surprising that ministers fail to specify any rights or even any specific rulings they find objectionable. Instead, it seems clear that their opposition ranges from an effort to become completely unaccountable under international law (which is an impossibility), to a ‘philosophical’ antipathy to the concept of human rights.

There is a widely available video (link) which shows that the current Secretary for Justice and Lord Chancellor Dominic Raab falls into this category. He also says he doesn’t believe in economic or social rights either, and of course the two are linked. Perhaps it was these beliefs which prompted the Prime Minister to believe Dominic Raab was suitable for these roles.

Instead, we should take the view that the irritation of ministers is a very small price to pay for the defence of our fundamental liberties. Similarly, that human beings do have fundamental rights (including against being trafficked, or sexually exploited, or free from torture, and so on), and that these basic rights are also linked to upholding economic and social rights.

It is sometimes argued that whatever ministers’ intentions, the erosion of liberties is always a dangerous step in removing defences against a future draconian or authoritarian government. Unfortunately, no such leap of imagination is required in relation to this government. They and their plans represent a real and present danger to our liberties and deserve to be forcefully resisted now.