Report shows that Policy Exchange, which called for the criminalisation of Extinction Rebellion and is funded by US fossil fuel giant ExxonMobil, influenced government clampdown on protest rights. 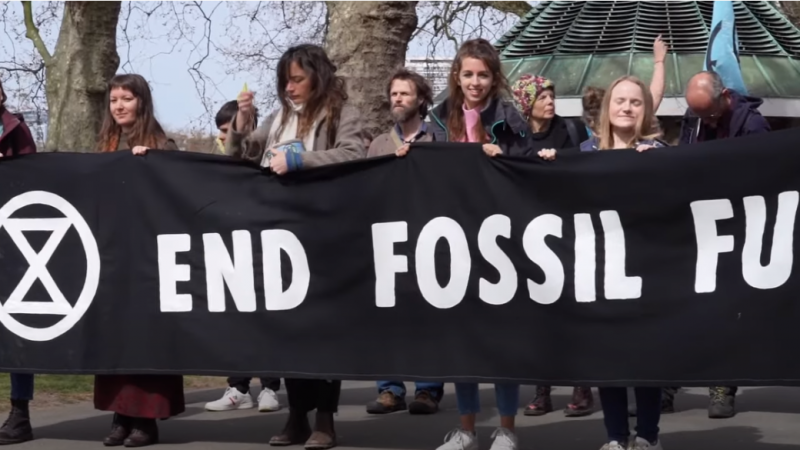 Policy Exchange, described as “the largest, but also the most influential think tank on the right,” received funds from an oil and gas company and later published a report advising the government to pass legislation to target Extinction Rebellion (XR), a new investigation by openDemocracy has found.

The think tank’s ‘Extremism Rebellion’ report was published in July 2019 and claims that the “people behind Extinction Rebellion advocate a political agenda with ambitions that reach far beyond environmentalism.”

The report was cited by a number of Tory MPs and peer, including Priti Patel, who condemned the group as “criminals”, saying they “threaten key planks of national life” and that she would not allow XR “anarchy” on the streets.

The announcement of the highly contentious Police, Crime, Sentencing and Court Act, which, with plans to introduce a range of anti-protest measures, incited widespread anger and months of ‘Kill the Bill’ protesting across the UK.

The controversial Bill included many of the ‘recommendations’ put forward in Policy Exchange’s ‘Extremism Rebellion’ report. A blog authored by Paul Stott, head of security and extremism at Policy Exchange, noted how the Bill was evidence that some of the think tank’s recommendations to deal with “the mechanics of the deliberate disruption of the public square” were being followed by the government.

A new investigation by openDemocracy shows that the think tank’s American fundraising arm received a sum of $30,000 from ExxonMobil in 2017. Headquartered in Texas, ExxonMobil is one of the world’s largest publicly traded international oil and gas companies.

In 2018, the state of New York sued the oil giant in a lawsuit that claimed the company engaged in a “longstanding fraudulent scheme” to downplay the risks posed to its business by climate change regulations.

Between 1997 and 2008, Exxon spent over $37 million funding groups that promote climate denial in the US. In 2015, it was revealed that the oil giant had known about the causes of climate change and the dangers of climate disruption poses since the 1970s.

As Greenpeace reports, “Exxon’s track record on climate science denial and climate double talk has been growing for some time.” For example, in 1997, Exxon CEO Lee Raymond told the 15th World Petroleum Congress in Beijing that the world’s climate isn’t changing, and that even if it was, fossil fuels would play no part.

In 2002, following months of activist action against Exxon, Greenpeace USA launched a Stop ExxonMobil campaign. A year later, Greenpeace Global Warming Crimes Unit converged on ExxonMobil’s compound in Irving, Texas, to charge the oil giant with crimes against the climate.

No suggestion has been made that the money Policy Exchange received from ExxonMobil may have been used to fund the report.

In light of openDemocracy’s findings, Caroline Lucas, Green MP for Brighton, referred to the policing bill as appearing to be “stained with the grubby, oil-soaked hands of the fossil fuel lobby.”

“And no wonder – this cracks down on the fundamental rights of protestors to challenge the very climate-wrecking policies espoused by this downright dangerous industry,” Lucas told openDemocracy.

Policy Exchange was set up in 2002 by Michael Gove, former Tory MP Nicholas Boles and Tory politician and life peer who served as Minister of State for Trade and Investment from 2015 to 2016, Francis Maude. Boles was succeeded as the group’s director by Antony Browne, a journalist and political correspondent for The Times. Browne stepped down in 2008 to work for Boris Johnson. He was succeeded by Neil O’Brien, former director of the right-wing Eurosceptic policy think tank, Open Europe, who was appointed as special advisor to George Osborne in 2012. He was succeeded by Dean Godson. In 2020, Godson was made a Conservative life peer by the government.

OpenDemocracy’s investigative report cites ExxonMobil’s annual giving report, which said that it supported the American Friends of Policy Exchange (AFPX). AFPX was set up by Policy Exchange in 2010. Policy Exchange’s website states that AFPX “encourages discussion of public policy ideas between experts in the United Kingdom and the United States.”

According to publicly available filings, since 2012, AFPX has received almost $5 million in anonymous donations, of which $3.5 million was awarded to Policy Exchange’s UK charity.

As well as receiving funding from Exxon, Policy Exchange has been given donations from a number of leading UK oil and energy companies.

A report in VICE in 2019, revealed Policy Exchange, which doesn’t like to divulge its funders, receives funding from Drax, the large power station in North Yorkshire, and Energy UK, the lobbying group for all British power companies.

A spokesperson for Extinction Rebellion says the government was “being directed by think tanks working for fossil fuel clients, meaning our laws are being written for the benefit of foreign oil and gas corporations.”

When pressed about the matter by openDemocracy, a government spokesperson said: “The government regularly consults a wide variety of opinions to develop legislation – this is no different.”